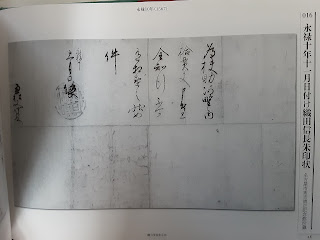 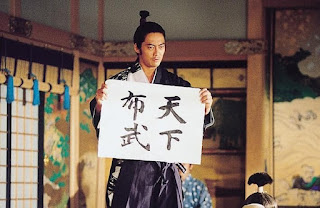 Here is a letter that Nobunaga wrote to Kanematsu Masayoshi in 1567.  This document is unique because it was one of the first to use the famous Tenka Fubu seal.  Tenka Fubu, "Rule the realm by military force!" This was the beginning of Nobunaga's quest to unite Japan under the sword after many decades of constant bloodshed.

The document written to Kanematsu Masayoshi mentions area of Kono in Mino and some money.  The document is dated November of 1567 and the Tenka Fubu seal in stamped in red, which means a more formal and serious letter.

I have written a blog post on Kanematsu Masayoshi a few years ago.  He was the lucky man who received sandals from Nobunaga in 1573.

Nobunaga no tame!
Posted by otsuke at 9:53 AM No comments:


I have probably posted this video before, but it needs to be added again after another look.  This video covers Okehazama from the sky and has routes that Nobunaga took during the Battle of Okehazama.  What I like about the video is that you can actually see what Nobunaga and his army did during the campaign.  Kiyosu Castle is mentioned first and it shows how much smaller Kiyosu covered the area during Nobunaga's time.  The area expanded during Nobukatsu's time in power.

Most of the people in the video, I know personally and worked with them as tour guides or volunteers doing other things related to the Battle of Okehazama.  Both the Arimatsu and Toyoake City Okehazama Battlefields are mentioned, which is fantastic.  With this video, one can see the route Nobunaga took to both places.  Even the old theory of Nobunaga's detour route is covered.  Again, a plus.  One can make up their own mind after watching the video along with proper research.

Tenka no tame!
Posted by otsuke at 8:23 AM No comments:

Here is the last of the Okehazama clips from various NHK Taiga dramas.  Who ever made the clips did a decent job.  In my opinion, King of Zipangu, the Nobunaga drama still has the best Battle of Okehazama episode.  Enjoy.

Nobunaga no tame!
Posted by otsuke at 9:28 AM No comments: 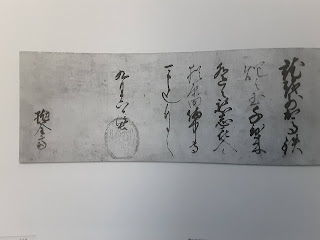 Here is a letter Nobunaga wrote to Rikyu, the famous tea master.  There is no date, but it is presumed that the letter was written in 1575.  In the letter, Nobunaga thanks Rikyu for the 1,000 musket balls he received as a gift.  Nobunaga's retainer, Harada (Ban) Naomasa is also mentioned in the letter. Naomasa was written as Harada Bichu no Kami in the document. Rikyu was addressed as Hosensai and the Tenka Fubu seal was in black.  The color of the seal makes a big difference.  The black Tenka Fubu is less formal and was used for private correspondence.  The red Tenka Fubu seal was used in formal and more serious documents. Since the document was a thank you note to Rikyu, it made sense that Nobunaga used the black Tenka Fubu seal.

Later that year, Nobunaga held a huge ceremony at Myokakuji Temple in Kyoto with Rikyu as the head tea master. 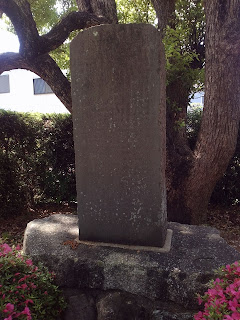 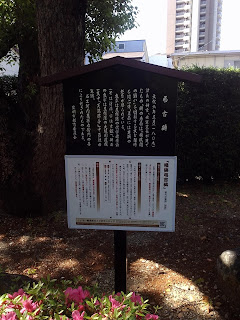 I have finished translating most of the inscription of Okehazama Toyoake City's Chokohi into English.  Here are the key parts:

Eiroku 3rd year Imagawa Yoshimoto of Suruga advanced his army west and on May 19th made camp north of Okehazamayama.  Lord Nobunaga with his army attacked Yoshimoto.

Suruga was a strong and dominant province and it had an alliance with the Hojo of Sagami and the Takeda of Kai.  However, the Oda (Nobunaga) of Owari sent false information.  So Imagawa Yoshimoto led the army to invade Owari.  With Fort Washizu and Marune fallen, Yoshimoto boasted, "Tomorrow around breakfast, we will take Kiyosu."  Soon from the northwest black clouds appeared along with wind and rain.  The Oda army attacked as cries were heard.  Yoshimoto's headquarters was in chaos and during the battle, 2,500 were killed in action.

Imagawa retainer Matsui Munenobu along with 200 soldiers were killed in action.

The Chokohi was written by Nakanishi of Tenmangu Shrine in Osaka.
It was erected in 1809 by a Shinto priest of Tsushima Shrine Toyonaga Himuro, a descendant of Matsui Munenobu.
The Chokohi was built by Magoemon Kawachiya.
The inscription composed by Hatakanae of the Owari-han (domain)

I would like to thank the Toyoake City Okehazama Guide Volunteers for the modern Japanese translation of the Chokohi.

Nobunaga no tame!
Posted by otsuke at 5:46 AM No comments: 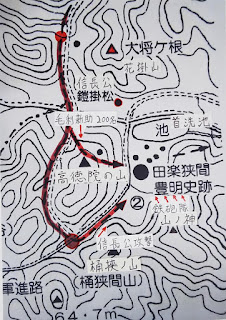 During the Battle of Okehazama, firearms where used.  The question is how many?  Probably a few hundred.  Now this a map of the Toyoake City Okehazama Battlefield.  The red line is direction of Nobunaga's attack.  Going south and then attacking east.  North of Okehazama (212 feet above sea level) is where Mori Shinsuke along with 200 men was placed and then attacked to the southeast.  Now, near (2) is where Nobunaga gunnery squad was located and attacked. Again, this is the Toyoake City Battlefield.  Also one must include the Arimatsu Battlefield when studying the Battle of Okehazama.  Both are related and close to each other (10 to 15 minutes apart by foot). If Imagawa soldiers fleeing to Odaka Castle during the chaos, then Arimatsu makes sense.  If the soldiers were fleeing to Kutsukake Castle, Toyoake City is the answer.  During the battle, Imagawa soldiers tried to escape to both castles.  Also the Okehazama area is wide enough to cover both battlefields.

The Matsudairaki and the Mikawa no kuni bunshi notes guns were fired at the Imagawa camp.  Nobunaga's army was around 2,000 when he attacked Yoshimoto's headquarters.  Here is my opinion and the number is conservative.  Nobunaga probably had 300 or less during the battle.  That excludes the number of firearms that Fort Marune,Washizu, Tange, Zenshoji, Nakajima were provided by Nobunaga.

Here is another video on Okehazama using clips from various NHK Taiga dramas.  Using the King of Zipangu, Toshiie to Matsu, Tokugawa Ieyasu, Kirin ga Kuru, and others.  Not bad at all.

At the moment I am still slowly translating some documents and will post the Toyoake City Okehazama Chokohi translation early next month.

Nobunaga no tame!
Posted by otsuke at 5:43 AM No comments: