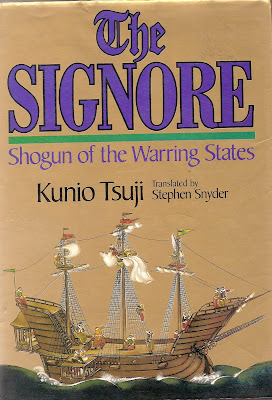 
If you are a Nobunaga fan or a Sengoku Jidai junkie, then The Signore is the book for you. Even though the book is fiction, it does provide details that Nobunaga's life was a lonely while unifying the Japan. I have to admit, I cried while reading this magnificent book. Here is the excerpt from the inside book jacket.

"Like the colorful, rapidly changing scenes of an old Japanese picture scroll, the events of this historical novel unfold in a series of unforgettable glimpses of misery and magnificence, cruelty and compassion.

Caught up in the late sixteenth-century struggle to unify Japan, a group of Portuguese missionaries react with curiosity, bewilderment, and admiration to the contradictions of this foreign land. Through the remote countryside and the streets of the capital, their dark-robed figures move amidst a shifting throng of fierce samurais, scheming Buddhist monks, wealthy merchants, and humble working folk. Their ultimate concern is with the common people; but the uncertainties of the age make the protection of the mighty essential. It is this need that brings them into contact with the enigmatic central figure of the story: the young lord Oda Nobunaga, who is obsessed with the task of imposing unity on a seething mass of rival forces. Ruthless, inquisitive, artistic, irreligious, he typifies the essential solitude of the man who seeks supreme power. Yet his relationship with the foreigners seems, paradoxically, to satisfy not only his thirst for knowledge-- of guns, of the other lands, of the universe-- but also a need for the human contact that his role makes impossible with his fellow countrymen. This strange relationship reaches a peak when Nobunaga has a splendid Catholic mission erected only a stone's throw from the magnificent castle that is the symbol of his hegemony. But the brilliance of the novel's climax is shattered at a single stroke by Nobunaga's sudden death. Thus, in its ending, this work-- so thought provoking in its picture of the meeting of the cultures--also seems to invite the reader to find beauty in the cruelty and impermanence of existence itself."

More later on The Signore which will include Nobunaga's appearance and a description of Gifu during Nobunaga's era.