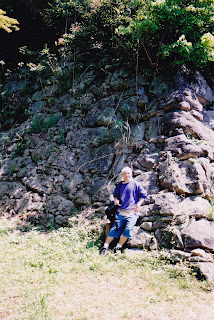 I have not done anything regarding Azuchi Castle of late.  To tell you the truth, it has been years since have visited Azuchi.  That said, there is a great article on the web that I found on Azuchi Castle and its Chinese origins.  http://chaari.wordpress.com/2013/04/03/aas-report-5-the-chinese-origins-of-azuchis-tenshu/

I do have Naito Akira's Fukugen Azuchijo and Oda Nobunaga to Azuchijo by Akita Hiroki.  Both books are highly recommended on the study of Azuchi Castle.  Some key points on Azuchi Castle: the massive use of stone, lots of gold used in decoration, and roof-tile as well.  One of the big drawbacks of Azuchi was that it had a stairwell rising up the hill which did not enhance its defense.  By the way, Azuchi Castle ruins is on my agenda next when I am in Japan.

Nobunaga no tame!
Posted by otsuke at 8:19 PM No comments: 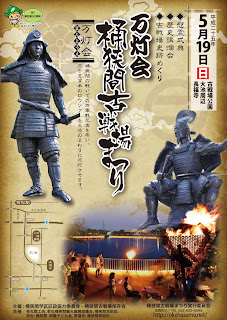 It is that time of year again and the 2013 Arimatsu Okehazama Festival will be held on May 19th.  It think is so awesome that the festival is held on the day of the battle.  The festivities will begin around nine in the morning and it will be an all day affair.  Mr. Okehazama (Wataru Kajino) is scheduled to give a lecture on the battle.  If you are thinking about going, his lecture will be well worth it.  He probably knows more than anyone I know about the Battle of Okehazama.  There will be also taiko drums, armor, and many other beautiful events at the festival.

Here is the festival link:http://okehazama.net/modules/osirase/index.php?page=articles&storyid=199

Tenka no tame!
Posted by otsuke at 8:49 AM No comments: 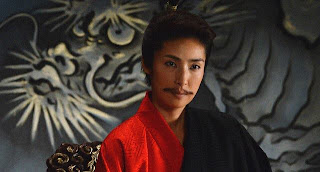 Earlier this month Onna Nobunaga movie was aired.  It was based on the novel written by Kenichi Sato.  Amami Yuki played the role as Nobunaga.  From what I understand the word on the street was she played the part well.  Uchino Masaaki played Akechi Mitsuhide, Koyuki as Nohime, and Nishida Toshiyuki as Oda Nobuhide.

I did write a post on the novel back in 2008.  http://otsuke.blogspot.com/2008/06/onna-nobunaga.html
The link for the movie is here: http://www.fujitv.co.jp/onna-nobunaga/index.html

I have not seen the movie yet, but excited to watch it when the chance comes.  For a historical fantasy film, this looks interesting.

Shobata Castle landmark was in the news recently when the statues of Nobunaga's father and mother along with the baby Uesama was erected near Shobata station.  Nice gesture, but I do not think Shobata Castle was the birthplace of the Uesama.  The only document that backs up Shobata is the Bishukojoushi.  I am more comfortable in stating that Nobunaga was born at Nagoya Castle in 1534.  Earlier this year, I have written a post on this subject:http://www.otsuke.blogspot.com/2013/01/nobunagas-birth-i.html

Tenka no tame!
Posted by otsuke at 6:56 PM No comments: 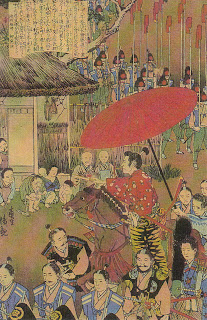 Nobunaga's wild and crazy youth prepared him for the future.  Sounds strange, but it was true.  His free thinking and I do not care attitude made him a man to be feared later in life.

"Into the sixteenth, seventeenth, and eighteenth year of his life, Nobunaga knew no other pastimes but these: He practiced riding every morning and evening.  From the Third to the Ninth Month he swam in the river, which made him an excellent swimmer.  Once when he was a training bout with bamboo spears, he observed: 'if your spear is short, you'll be at a disadvantage no matter what.'  So he made spears with a shaft of three to three and a half ken [5.4 to 6.3 meters].

As for young Nobunaga's manner:  He had on a bathrobe (yukatabira) with its sleeves removed, wore trousers (hanbakama) over it, and carried any number of pouches for flints and that sort of thing around his waist.  He kept his hair straight up like a tea whisk, tied with crimson and fresh-green cords.  He bore a great sword with a vermillion sheath and ordered all the samurai of his retinue to outfit themselves in vermillion.  He employed Ichikawa Daisuke to guide him in archery practice and trained on the harquebus with Hashimoto Ippa as his master.  Hirata Sanmi, whom Nobunaga kept constantly at his side, was his instructor in military science and tactics.  The two of them went also went hawking together."

All that training such as swimming, riding horses, guns, and the bow prepped Nobunaga for the future. One must remember that Nobunaga's early use of guns made him a genius.