Here is Yasuke Part II using They Came to Japan, An Anthology of European Reports on Japan 1543-1640 by Michael Cooper, p. 70.

"All this aroused the curiosity of Nobunaga who summoned the man into his presence.  He was so intrigued by the dusky fellow that he made him strip to the waist to satisfy himself that his colour was genuine.  The ruler thereupon called his children to witness this extraordinary spectacle and one of his nephews gave the man a sum of money."

Tenka no tame!
Posted by otsuke at 9:35 AM No comments: 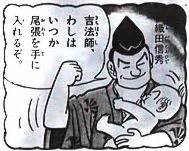 Here are some facts on Nobunaga's father, Oda Nobuhide.


Nobunaga no tame!
Posted by otsuke at 1:24 PM No comments: