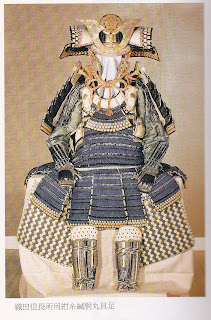 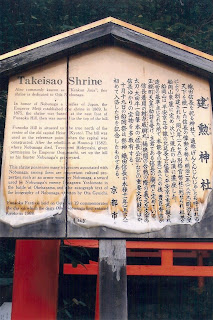 This is a picture of armor that Nobunaga might possibly have worn at the Battle of Okehazama.  The armor is known as Konito odoshi tomaru and it is now located at Kenkun Jinjia (Takeisao Shrine) in Kyoto. As you can see, the armor is still in decent condition, which is good news in itself.  The shrine also has the Samonji sword that Imagawa Yoshimoto had at the Battle of Okehazama and a copy of Ota Gyuichi's Shincho-Ko ki.  For those who like to take a dip, the Funaoka Onsen is very close by as well. 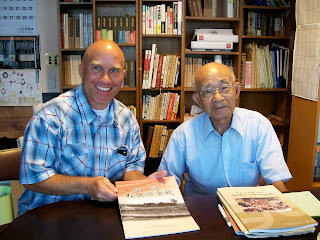 Local Okehazama historian Mr. Okehazama (Wataru Kajino) was in the local paper recently discussing his long career researching the Battle of Okehazama.  The article mentions the opening of the redeveloped Arimatsu Okehazama Battlefield Park and the history around the area.

Photo was taken at the Okehazama Research Center two years ago. 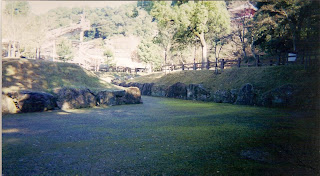 The Nobunaga Kyokan has updated their post and includes a map where the recent archaeological work has been done around the Gifu Castle Park area.

It is nice that slowly we are able to understand what Gifu was like during the time of Nobunaga.  I highly suggest that one should visit Gifu Castle and the Gifu City Museum of History for a better understanding of Gifu and Nobunaga. 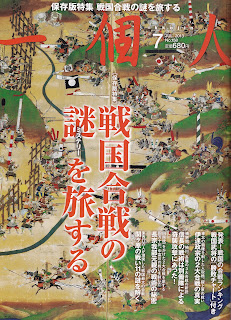 The new issue of Ikkojin has the Batlle of Okehazama as its top battle in the Warring States Era.  That is great news indeed.  The other Nobunaga battle that was in the top was Nagashino, and it came in sixth place.  Sekigahara came in a very close second.  The battles were graded on scale, command/leadership, effect, and scenic spot.  Each battle has a color map with pictures of the landmarks at the battlefield.  I am so excited that the Battle of Okehazama won out.  It does has pictures of both the Arimatsu and Toyoake City Okehazama battlefield.

The Battle of Anegawa also is in this current issue along with a special article on Date Masamune.  The Battle of Kawanakajima is discussed as well.  Also the issue includes color graphic displays of battle formations, when armies set out for battle, and the head viewing ceremony.  Overall, I endorse this issue as must for anyone who is interested in Sengoku warfare.

Tenka no tame!
Posted by otsuke at 7:45 AM No comments: 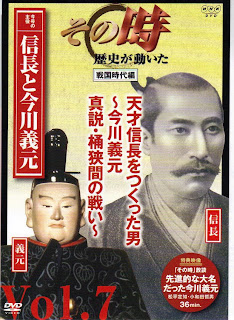 In 2007, NHK aired a documentary on the Battle of Okehazama hosted by Matsudaira Sadatomo with special guest Owada Tetsuo.  The documentary was easy to understand since it was at a slow pace and Sadatomo's smooth voice made it more easier to follow.  The show contains a lot footage of various NHK Taiga dramas such as Nobunaga: King of Zipangu and Toshiie to Matsu.  Sources used in the documentary included the Shincho-Ko ki, Mikawa Montogatari, and the Koyo Gunkan.  If any of the sources that stood out on the show, it was the Koyo Gunkan.  According to the Koyo Gunkan, there was a randori (chaos taking) during the battle.  Highly unlikely since the Koyo Gunkan is the book of the Takeda.

The program goes into great detail of the Imagawa organization structure which was key to their power.  Also discusses Imagawa Yoshimoto's and Oda Nobunaga's character.  The two were completely different animals.  While land surveys, house laws, and cultural exchanges (Kyoto) were essential to the Imagawa, Nobunaga relied on new weapons (guns), fighting spirit, and promotion on ability, not on family linage.

At the end of the documentary, the great Samonji sword is shown at Kenkun Shrine in Kyoto as well as  a funeral ceremony at Senninzuka where the Okehazama dead are buried near the Toyoake City Okehazama Battlefield.  The documentary is a great study aid for the Battle of Okehazama scholar and highly recommend it.  It also includes a thirty minute discussion between Sadatomo and Tetsuo on various topics related to the battle.

Tenka no tame!  Nobunaga no tame!  Owari ni hikari wo!
Posted by otsuke at 8:24 AM No comments: 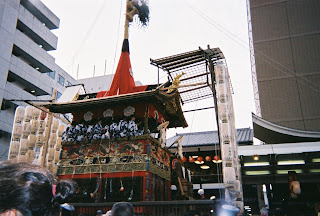 Later this month, Kyoto will host one of Japan's most popular festivals, the Gion Matsuri.  I have been lucky to be able to see the floats in action in the past.  That being said, even the Uesama got into the action back in 1578.  From The Chronicle of Lord Nobunaga p. 286.

"Tiger, Sixth Month, 14th day: Nobunaga watched the Gion Festival.  He had told his horse guards and pages that there was no need for bows, spears, halberds, or other hand weapons, so they carried none.  After viewing the festival, he gave leave to his life guards and went hawking straight away with about ten pages.  There was a soft drizzle."

Nobunaga told his entourage that no weapons were needed and just enjoy the festival.

Nobunaga no tame!
Posted by otsuke at 8:49 AM No comments: