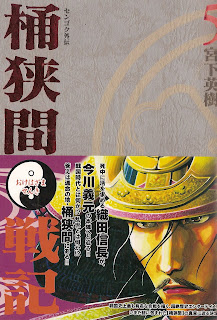 Earlier this month I was finally able to buy Hideki Miyashita's Okehazama comic, Okehazama Senki. Volume five was the last in the series and I have to admit the comic was not bad at all. According to Mr. Yukio Kajino by e-mail, Miyashita spent a lot of time around the Okehazama battlefield and his work shows.

There were a couple things that caught my attention. One, Imagawa Yoshimoto was a lot slimmer and younger in the comic. In fact, Yoshimoto reminded me of Gackt believe or not. Comics are meant for enjoyment and I did not get too carried away from the historical inaccuracies. Second, people such as Yanada Masastuna, Matsui Munenobu, Okabe Motonobu, Hattori Tomosada appeared. Which I was pleased. Third, was the story in general. The five volume set covered both Nobunaga and Yoshimoto's career, a major plus in my opinion. The rain, intelligence, and the battles were done in good taste.

I am pleased to own all five and have to say, a must have for those who love Nobunaga and Okehazama in general. A special thanks to Mr. Yukio and Akitsugu Kajino for the comics. As for next month, more on Society at War.

Tenka no tame!
Posted by otsuke at 7:24 PM No comments: 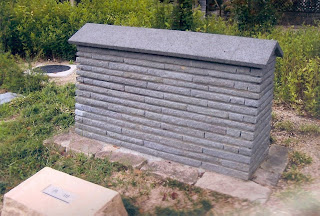 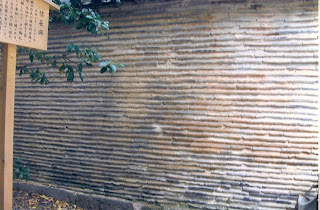 Here is the actual Nobunaga "victory wall" located at Atsuta Shrine. A must see in my opinion. 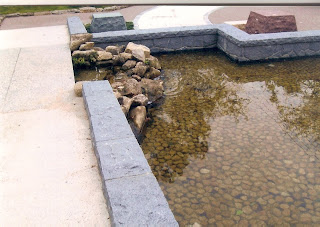 This small pond represents Ise Bay and beautifies the park. The Okehazama staff really took the time and effort to create a first-class park.

I understand that Mr. Yukio Kajino did have a lecture last weekend in Nagoya discussing the Battle of Okehazama. Hopefully it went well and looking forward in the future to meet with him again. Next month, I plan to post more on Neilson's paper, Society at War.

Nobunaga no tame!
Posted by otsuke at 4:52 PM No comments:

If you own a copy of David D. Neilson's dissertation Society at War: Eyewitness Accounts of Sixteenth Century Japan, you know there is ton of juicy information. Today, I would like to share with you a story about young Hideyoshi.

"When Kyuan-sama (=Kitsuno, Nobunaga's wife/concubine), was in Ikoma Yashiki, he stayed close to her and kept her entertained (lit. flattered), her. Because he was good at talking, even in front of her, he unashamedly told sexual stories which usually, people [would] have difficulty telling [in front of such a refined person]. Once, when Lord Nobunaga came to Ikoma yashiki, Tokichiro was called before him to keep him company. Tokichigi (=Tokichiro=Hideyoshi), did not hesitate even in front of Lord Nobunaga., and as usual, told comical stories with many [hand] gestures which pleased Lord Nobunaga. Although he was small, he directly asked Nobunaga to hire him. Hachiemon, who happened to be present, could not help but say; 'Who the hell do you think you are? A little guy like you doesn't have the physical strength [necessary to be a soldier], and your sword technique is doubtful [as well].' Hachiemon tried to placate him, but Tokichiro asked Kyuan-sama to intercede with Lord Nobunaga on his behalf, saying 'I will do anything, even caring for the horses (umano kuchitori).' Her (Kitsuno-sama's) attendant recommended him to Lord Nobunaga. He became a courier for messages between villages (guson, lit. errand boy), [in Owari] and performed smartly. He finally ended up working in Kiyosu Castle. This was the beginning [of Hideyoshi's meteoric rise]."

Tenka no tame!
Posted by otsuke at 7:46 AM No comments:

Happy New Year to all and God Bless! Today, we will celebrate the New Year Nobunaga style. 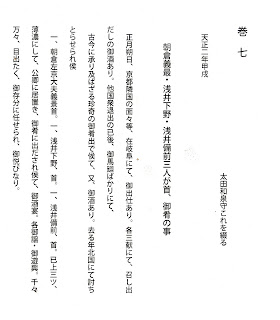 "On the first [day] of the First Month, all of the warriors from Kyoto and its surrounding provinces came to Gifu to present themselves before Nobunaga. Nobunaga hosted a banquet where each quest drank three rounds of sake. After the Provincials ['takokushu', lit. 'men from other provinces'] had left, there was another feast, which only His Lordship's Horse Guards were allowed to attend. During this second banquet, some extraordinary and unprecedented things were presented as accompaniments to the sake. These were the heads of:

Their heads had been taken in the previous year [1573] in the Northern Provinces. The banquet began when these heads, coated with gold paint and placed on square trays, were brought out with the sake. Everybody sang a song for His Lordship and had a merry time; Nobunaga himself was happy that everything was under control."

This is how you should celebrate the New Year.

Nobunaga no tame!
Tenka no tame!
Posted by otsuke at 9:08 AM 9 comments: