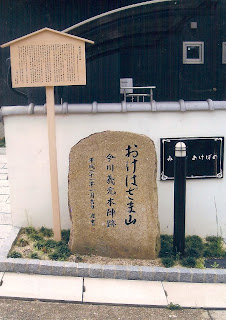 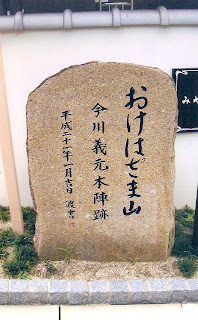 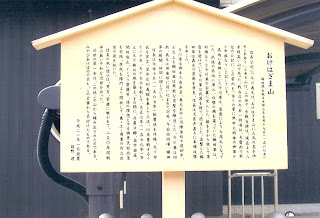 I finally was able to take photos of the new Arimatsu Imagawa Yoshimoto's Honjin at Okehazamayama. The Toyoake location is well known, but this landmark is new and refreshing. Wataru Kajino wrote the paragraph using Ota Gyuichi's Shincho-Ko ki as his base. The notice board starts out with Imagawa Yoshimoto is resting at Okehazamayama, the thunderstorm, and then the surprise attack by Nobunaga. It continues with Nobunaga conquest of Mino and Azuchi Castle.

The landmark is very close to the Arimatsu Okehazama Battlefield Park and is part of the Okehazama Battlefield Walking Tour. The Imagawa Yoshimoto Honjin Landmark was nicely done and fits in beautifully with the newly constructed battlefield park. I have to thank Mr. Yukio Kajino and his Akitsugu for all their help and support. The one person who I have not met and would like to in the future is Mr. Wataru Kajino.

This still begs the question which landmark is correct, Arimatsu or Toyoake? As for now, Arimatsu is the correct landmark. That being said, I have always stated that both landmarks are legit and have historical significance. 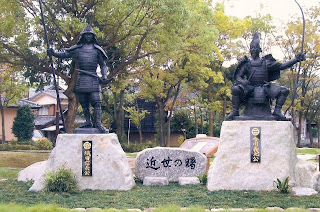 My one week trip back to Japan was a huge success. Many thanks to the Kajino family and Yuko Hiwada. I have to say the walking tour with Mr. Yukio Kajino was the major highlight of the trip. In my opinion, you will need at least one day to walk around both Okehazama battlefields and an extra day as well to visit other landmarks related to the battle. 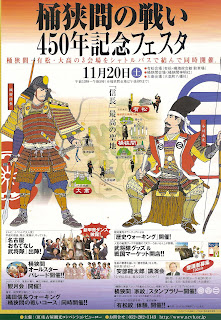 Even though I have written a book about the battle, I have to admit that there is a ton of new information that has been published the past year or so. Mr. Wataru Kajino has updated his book and must say, a must have. That includes the fiction novels, magazine articles, and the like. 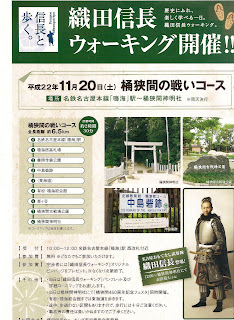 The statues were a real treat to look at. I thought they would be bigger, but the size suit the battlefield park nicely. Here is one fact that caught me by surprise. This is the first Imagawa Yoshimoto statue in Japan. Even the great Sengoku historian Owada Tetsuo was a little surprised as well. As for the Nobunaga statue, it was different from the usual that I have seen. My favorite statue is the Golden Nobunaga in Gifu city, but this new statue blends right in with the Okehazama battlefield.

Nobunaga no tame!
Posted by otsuke at 11:37 AM No comments: 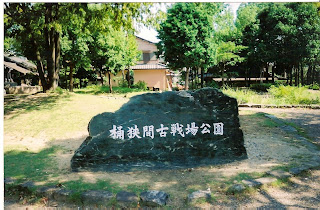 I am heading back to the Okehazama battlefield very soon and looking forward to the two statues, the landmarks, and Professor Kajino. As Always, I plan to take many photos as possible.

Here is a fun Nobunaga link that my friend Dohaland suggested.

Nobunaga was known to love strong flavored country foods. According to the Shincho-Ko ki, he ate melons, persimmons, chestnuts, and crammed rice cakes (mochi) in his mouth. There was a story that Nobunaga almost killed a cook because the food was not up to his tastes. 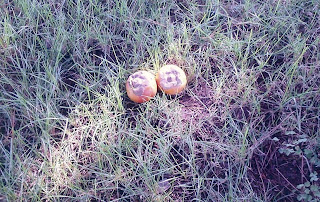 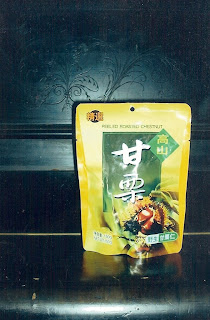 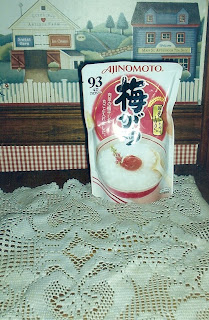 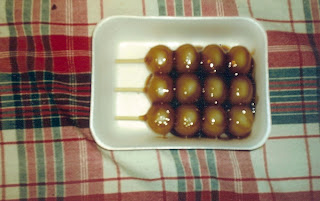 It was well know Nobunaga ate some form of chazuke (rice porridge) before the Battle of Okehazama. Simple country foods, strong flavor, and packed with nutrients kept Nobunaga healthily and stable.

A great link with some information in English on Nobunaga and his diet:

According to the link, he was also fond of dumplings and were nicknamed "Uesama dango" (His Highness's dumplings). Perfect and fit for a king. Of course, on certain occasions, the food would be more elaborate.