I finally found and bought the Nobunaga Taiga "King of Zipangu" official guide book. Not bad at all, but my favorite is the interview with the actors who played the role as Nobunaga in previous Taigas. They include Takahashi Koji in Taikoki, Sugi Ryotaro in Ten to Chi to, Takahashi Hideaki in Kunitori Monogatari, and Yakusho Koji in Tokugawa Ieyasu. 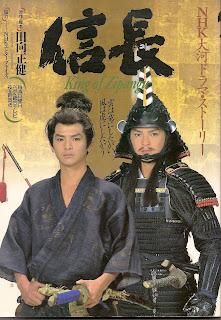 I am still reading the Rekishi Kaido Okehazama issue and pleased to say that Fujimoto Masayuki's longstanding theory (Okehazama was not a surprise attack) was mentioned. Why am I pleased? The answer is simple, it means that his theory was thought out carefully, stuck to his gut, and did not give in to the trends (theory first appeared in 1982). I still disagree with his theory because it was a surprise attack. Even Owada Tetsuo mentioned it a frontal surprise attack.

As for the Okehazama Festival, here is a video with Wataru Kajino speaking.

Nobunaga no tame!
Posted by otsuke at 2:59 PM