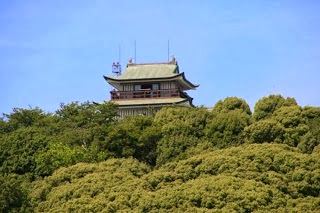 There is news from Komaki that Nobunaga's yashiki or mansion was found at Komaki Castle.  If the discovery is true, this is great news in general relating to Nobunaga and Komaki Castle.

Nobunaga often held sumo bouts at Azuchi's Jorakuji.  He held one early in 1570 and it was recorded in Ota Gyuichi's Shincho-Ko ki.

"On the 3rd of the Third Month, Nobunaga summoned sumo wrestlers from throughout Omi Province and watched them compete in Jorakuji.  The participants were

In addition to these countless other wrestlers with good skills flocked to Jorakuji, all of them thinking to outdo the others.  The referee was Kinose Zoshun'an.
Nobunaga summoned before him two wrestlers who had won the most bouts, Namazue Mataichiro and Aoiji Yoemon, and gave each of them a sword and a dagger with gold-encrusted sheaths.  From this day onward they were admitted to Nobunaga's vassal band and were appointed sumo commissioners, the ultimate of honors for both men.  The skilful and attractive sumo put on display by Fukao Matajiro on this occasion caught Nobunaga's eye, so he gave Fukao a present of some clothes--a happy event for Fukao."


Nobunaga no tame!
Posted by otsuke at 1:11 PM No comments: