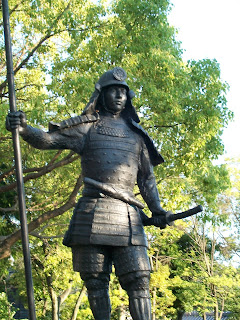 Yesterday while surfing the web, I found a link on Nobunaga's generals and it is not that bad at all.http://www.historum.com/blogs/leakbrewergator/71-oda-nobunagas-generals.html

The link provides a few short sentences on Nobunaga's key generals/captains.  It is very brief, but it works for someone wants to know just the basics.

Tenka no tame!
Posted by otsuke at 8:17 AM No comments: 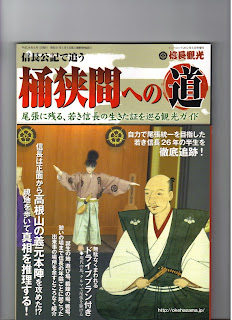 I received Mizuno Seishiro's magazine on the Battle of Okehazama last week from a friend in Japan.  So far, I am impressed by the rich color photos and maps.  The magazine covers the Oda family presence in Owari to the Battle of Okehazama itself.  If you are interested in young Nobunaga's life, this magazine is for you. Both the Arimatsu and Toyoake battlefields are discussed.  Also the magazine has one day travel courses for those who are interested in visiting the historical landmarks. A major plus in my opinion.  Mr. Mizuno's bibliography uses the most current resources and his links are decent too.  There are a few things that I do not like about the magazine which will be discussed next month.  Overall, I do approve this magazine with two thumbs up.

Nobunaga no tame!
Posted by otsuke at 6:58 AM No comments:

This post will have a passage on Nobunaga's last chakai at the Honnoji the day before he took his life. I think the passage does gives clues what happen that day. George Elison, Dues Destroyed: the Image of Christanity in Early Modern Japan, p. 82. "(Oda's) purpose in coming to the Honnoji was not that of the warrior but rather that of the connoisseur of the major elegantiae of the age, the tea ceremony and the various objects d'art appurtenant to it. He had invited famous teamen and court nobles to attend at a sumptuous display of his precious utensils--a list of the most valuable thirty-eight exists to the present, dated the day prior to the disaster. Nobunaga's tea party proved to be very expensive diversion. He entertained his guests late into the night with talk of his dreams of the past and designs for the future, until the irruption of Ackechi's soldiers ended the pleasantries." Tenka no tame!
Posted by otsuke at 5:03 AM No comments: