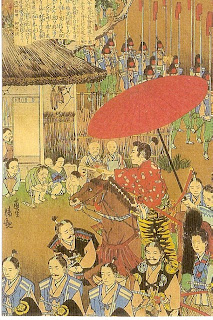 I just purchased The Signore by Kunio Tsuji. According the Samurai Archives Online Citadel, the book is a must read. The work is fiction however, a great read comments from the Online Citadel. I should receive it in two weeks. Looking forward to reading it.

Nobunaga no Tame!
Posted by otsuke at 4:58 PM No comments: 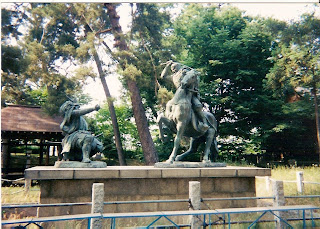 The 4th Battle of Kawanakajima is one of my favorite non Nobunaga battles. Yesterday I bought a book by Kazutoshi Hando, Tettei Bunseki Kawanakajima Kassen. I like the book so far. What is so fascinating about the battle is that Uesugi Kenshin and Takeda Shingen fought five times without a clear victor. Go figure. The 4th is the best. Kurumagakari, Operation Woodpecker by Yamamoto Kansuke, and Kenshin and Shingen in hand to hand combat. What a battle. The battle was open field and that was slowly coming to and end. Most battles would involve taking castles and forts later in the Sengoku Era.

I do have Toshiro Mifune's classic Furin Kazan movie. I love it and one movie I will never give away. As for the photo above, that was taken in the mid 90s. I was only there for a couple of minutes and had the time to take a quick photo.

Wow! As a hardcore Catholic and Knight I am pleased with the Republican pick for VP. Why? Sarah Palin can kick your rear end. A pro life, pro gun(Nobunaga would love her for that), capitalist(Nobunaga again!), the best of all. She is an iron lady! Testu Onna! Going back to work only three days after her son was born this April. I will tell you Nobunaga would hire her in no time at all. She has the no bull attitude just like Nobunaga. A God given gift. I do not care for white women, but she is beautiful for her age. She looks young because she is a redneck. a get er done attitude! Nobunaga was a country boy himself.

So what is the story here? Lawyers, Ivy League brats, and elites cannot compete with the American can do spirit! Nobunaga loved and promoted that type of work ethic in his circle. That was the reason why he was successful in his career. Just do it!


Nobunaga no Tame!
Posted by otsuke at 7:39 PM No comments:

I will continue to discuss Varley's article. The more I read it, the more interesting the paper becomes. The article discussed the Battle of Nagshino a great deal. What took me by surprise was the number of soldiers who participated in the battle. This would be critical and will explain why in a moment. Varley stated, "By some estimates, Nobunaga had 30,000 troops and Ieyasu 8,000 ( a combined total 38,000) and Takeda Katsuyori had 15,000. But Owada Tetsuo believes that the actual totals were about half of these numbers" (Varley p. 118).

I do have the Owada Tetsuo book that has the information. Sengoku Juu Dai Kassen no Nazo listed the information. To tell you the truth, I just purchased the book two weeks ago. Here is the numbers Owada wrote in his book. Oda Nobunaga and Tokugawa Ieyasu 18,000 and Takeda Katsuyori 6,000. See pages 113, 118-9. If you break up the Oda and Tokugawa armies, Oda 10,000 and Tokugawa 8,000?

Here is the critical factor, If Nobunaga had around 10,000 troops and if you include Fujimoto Masayuki's radical theory, then Nobunaga's gunners would have made up to 10% of the army.
Fujimoto's radical theory could make some sense. However, I still do not believe it. What is even more stunning was Katsuyori's low numbers. If that was the case, then it was a real disaster for the Takeda.

Varley's article still needs to be discussed. There is a wealth of information that has to be looked at. As I said before, it is one of the best I have read so far this year.

The best book on Takeda Shingen

I received my book Monday and holy cow! I have to admit Shingen in Command is one of the best works on the Takeda family in English yet. Most impressive was the bibliography. Terje Solum's sources were all in Japanese. Awesome were the onsens, Japanese horses, and the photos. All done with class. If you cannot read Japanese and want to learn the history of the Takeda family, Terje Solum's book is the way to go. A must read for all who love Sengoku Japan.

Posted by otsuke at 7:22 PM No comments:

Saga of the Samurai

Yesterday I purchased a new book online. Saga of the Samurai: Shingen in Command by Terje Solum and Anders R. Rue. It is the fourth book in the series. I have heard nothing but good things about the book. Looking forward to reading it once I receive the book. 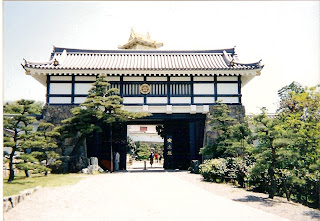 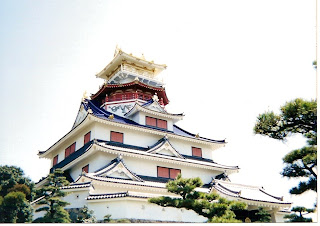 Nobunaga no Tame!
Posted by otsuke at 12:28 PM No comments: 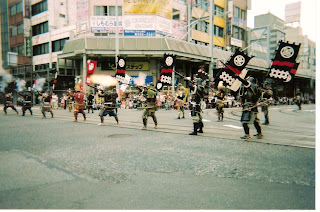 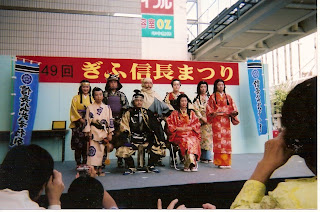 Here are some photos from the Nobunaga Festival in Gifu. The Festival is held in early October yearly. The picture on the left is a group photo of Nobunaga and his posse. The one on the right is the teppo-shu firing away. Oh by the way, Nohime was in the group photo. She is lovely! 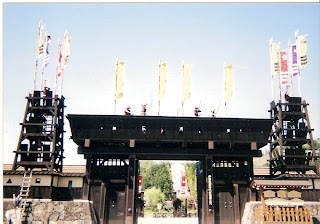 I continue to use Varley's work on this post. He continues his great work describing Nobunaga and Sengoku warfare.

"In the sixteenth century forts sprang up everywhere and battling usually involved attacking and trying to take them. Nobunaga, for example, fought relatively few open-field battles. The great majority of his armed encounters involved either attacking enemies in forts or defending against enemy attacks on his forts"(p.111).

Here is what a fort might have looked like in the Sengoku Era. Photos taken in March 2001 at Sengoku Jida Mura in Ise. 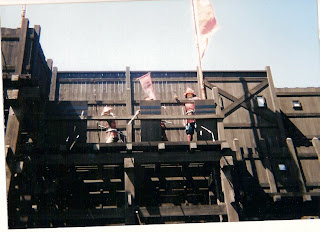 Posted by otsuke at 4:14 AM No comments:

I have to admit Varley's article is one of the best I have read all year. Packed with so information it is hard to pick out the best part of the article. I wish I had the article earlier this year. Why? The article had some prime data on the Battle of Okehazama which I would have used in my Okehazama book. I will tell you up front that the next edition will.

"Thus, in the days before Pearl Harbor in 1941, Admiral Yamamoto Isoroku (1884-1943) and many other Japanese military leaders referred to Okehazama in their letters and diaries as they planned their surprise attack on the United States. For them, Okehazama was a synonym for a sudden, unannounced attack"(p.114).

They knew Nobunaga's success at Okehazama and how to use his tactics at the right situation. However, according to Varley, Nobunaga only used the surprise attack once in his mighty military career.

"Whether or not Nobunaga defeated the Imagawa with a surprise attack at Okehazama, he did not use that tactic during the remainder of his military career"(p.114).

If this was true, one reason why could be he was not forced to use the surprise attack option. He was slowly destroying his enemies with diplomacy and force. As I said before Varley's article is data rich. If anybody out there is a Nobunaga fan, this article is a must read no question. Again, I must thank Samurai-Archives for sending me the article. More later.

Nobunaga no Tame!
Posted by otsuke at 7:28 AM No comments:

The Battle of Okehazama has won the poll. I think it is obvious why Okehazama won. Explained later.

Thank you for those who voted.

This has to be one of best written works I have seen in a long time. He starts when the Portuguese arrived at Tanegashima in 1543. Not only that, but evidence of early gun use in the 15th century before the Onin War(p.106). More important, there is evidence that the Eastern Army used a "fire spear" in 1468(p.106). The Japanese knew firearms from earlier conflicts with the Mongols.

Pages 116-120 deal with the Battle of Nagashino. Varley does well to describe Katsuyori's mishaps. He has been labeled as a "wild boar commander"(p.118). Go Figure. Varley has
mentioned Mr. Fujimoto Masayuki as a source. I disagree with Fujimoto on his 1,000 stance. Varley mentioned that Ota Gyuuichi's Shinchoo-Ko ki is now the standard since it is more reliable than Oze Hoan's book. Then he explains why the two books are so different. He said,"Easy to read and exciting, Shincho ki became the equivalent, for its time a best seller;..."(p.119).

If I have anything against the article, he did not use the Nagashino Nikki as a source for the battle. He gives Nobunaga credit for changing Japanese warfare, which he greatly deserves. However, Varley did not mention the Battle of Muraki 1554 which Nobunaga used his guns to near perfection. His bibliography is sublime and uses Geoffrey Parker's Military Revolution which is also a must read.

Later I will write on Nobunaga and the siege of Sengoku forts written by Varley. To conclude this post, I must thank Samurai-Archives for sending me the information.

I have only finished reading half of the book so far. Nobunaga no Youhei is decent, but I cannot finish reading it. I do not know why. I always enjoy reading Tsumoto Yo's books. The book is about Nobunaga, guns, Negoro-shu, and the Ishiyama Honganji. As for the book, it is not the matter of if, but when.

Nobunaga no Tame!
Posted by otsuke at 5:33 PM No comments:

I will be reading Nobunaga no Youhei over the weekend. The book was written by Tsumoto Yo. I have to admit. I am a big fan of his work.