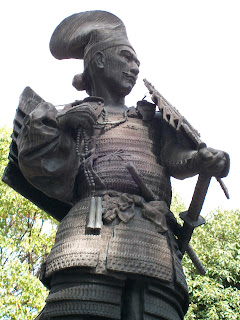 I found an awesome quote by the Uesama found  in the Cambrige History of Japan Volume 4 Early Modern Japan (pp. 43-44).

"He was bold in his purpose, ruthless in his execution: 'There are so many corpses in Fuchu that there is no room for more,' he claimed after leading more than thirty thousand troops into Echizen."

If you were the enemy of the Uesama, chances are you were going to to be wiped out.


Nobunaga no tame!
Posted by otsuke at 7:36 AM No comments:

"But is was Oda Nobunaga who used the term 'realm' (tenka) most effectively.  By his time it had aquired four concentric layers of meaning: (1) Japan and the people who lived there; (2) Kyoto and its environs, focus of the regime that ruled the nation; (3) The regime itself; and (4) The individual rulers of the regime.  Nobunaga used the term first sense to criticize the shogun: 'The realm," he stated, 'is reprimanding Ashikaga Yoshiaki.'  He then overthrew him.  In this instance Nobunaga claimed to represent public opinion.  But at the same time he continued to maintain that he had been entrusted with the government of the realm and ascribed the third and forth meaning to himself.  Nobunaga was at once the representative of the realm (a ruled object) and the realm itself (the principal of the realm).  As the personification of the realm, he felt called upon to replace the old social order.  Because Nobunaga was killed halfway on his path to unification, he could not be called a 'man of the realm,' but he was nonetheless the first to develop and apply the mode of action associated with a man of the realm in actual politics."

One must remember when the Uesama was about to overthrow the lame shogun Ashikaga Yoshiaki it was stated that even the peasants and crude farmers called him the evil shogun.

Tenka no tame!
Posted by otsuke at 8:53 AM No comments: