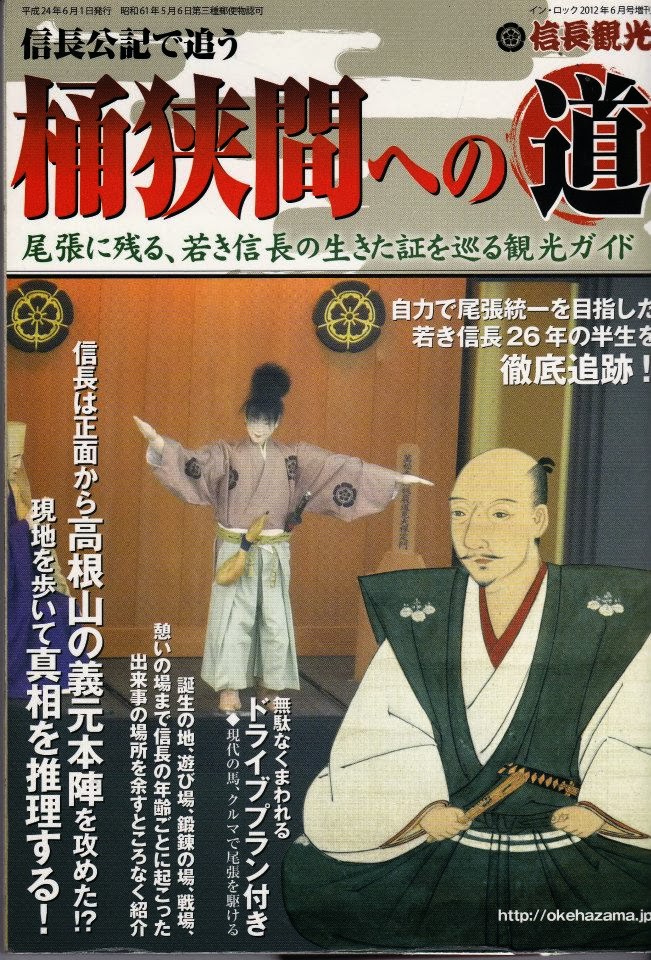 I will finally write my review on Mizuno Seishiro's take on the Battle of Okehazama.

Okehazama he no Michi was published earlier this year and I have to say, it is a must read.  However it does have some flaws.

Here are the flaws that I have found.

The positives which were many:

Overall, really enjoyed the magazine and it is highly useful.  In my humble opinion, this is a must have for the Battle of Okehazama scholar.
Tenka no tame!
Posted by otsuke at 8:58 PM No comments:

Normally when people talk about Nobunaga, they often mention about his genius as a military tactician.    However, he was also known for his economic talents as well.  The first part deals with the difficulty of traveling during the Sengoku Era and the second one will explain Nobunaga's answers to economic freedom.  Jeroen Lamers Japonius Tyrannus p. (136).

"Travel in 16th-century Japan was dangerous and expensive, and toll barriers were a common phenomenon.  In August 1565, Frois wrote that travel in the Kinai, where he had arrived from Kyushu in February of that year, 'is very costly' because of the fees one has to pay.  At the time, a traveller going, for instance, from Nara via Kyoto, to Akechi in Mino Province would encounter no less than eighteen barriers.  two people carrying two wine casks over this stretch would pay duties amounting to one kan and 496 mon, a respectable sum if one considers that many of Nobunaga's early land grants represented a yearly income around twenty kan.  It is hardly surprising that travelling merchants would sometimes attack newly erected barriers.

Sengoku daimyo commonly strove to abolish all checkpoints impeding free traffic to further trade within their domains.  Nobunaga was the first to apply this policy on a greater scale.  The abolition of toll barriers represented a cut in the tax burden shouldered by the common populace.  Although Nobunaga did not redirect this cash flow to his own  coffers, the indirect benefits must have been substantial.  More and cheaper traffic meant more trade; more trade meant higher economic development, which in turn increased Nobunaga's capacity to wage war."