I recently translated Nobunaga's last trip to Kyoto before his tragic death at the Honnoji. This is by no means perfect, but at least you will get a clear picture on what happened.

It would be only a few days later when Akechi Mitsuhide betrayed Nobunaga at the Honnoji. If anything sticks out here, is the lack of soldiers he had on his journey to Kyoto. On reason why was his forces were spread to thin fighting all over Japan. Then again, he did not expect Mitsuhide to rebel against him.

Since May is the month of the Battle of Okehazama, I would like to share with you part of the Bukoyawa's version. You can find in David D. Neilson's Society at War (pp.84-85).

"Having changed direction we (the Kashiwaishu and the Sassa Clan), [left Narumi] and arrived at Zenshoji. By that time, we numbered only eighty or so men. Because Nakajima Fort had already been occupied by the Suruga army, there was nothing we could do [there].

Just then, someone raised a battle cry near Taishidake. It was dark on all sides and thunder shook both heaven and earth. We were in a state of shock and took petrified to move. Before long, a triumphant shout echoed from Hazama, but we could not tell if it was raised by friend or foe.

When Sassa Kuranosuke realized that he was late [for the battle], his face convulsed and told his party to dismount. Looking out over an area three cho (one cho=2.45 acres), we saw that the field curtains (maki) [of the Imagawa camp] were lying in the mud. Fallen men and horses created a terrible scene.

The Suruga army had disappeared like the ocean tide. Sassa Kuranosuke and the Kashiwaishu, we were all so close to Dengakuhazama, [but because we went to Narumi as directed by the Sassa Clan general who met us on the road and because we helped the Sassa Clan to fight at Narumi, we were unable to arrive at Hazama as ordered by Lord Nobunaga]. It was a great blunder. Kazusanosuke-sama (=Nobunaga), saw us, but ignored our presence. He departed for Kiyosu holding aloft a spear to which Imagawa Jibusho's severed head had been tied by the hair. Everyone was downhearted and that evening, we went back to Ryuzenji Fort."

The men of the fields went along with the Sassa to attack Narumi Castle. However, they were late to join Nobunaga and did not participate in the battle. Also it is quite possible that the Sassa attacked Narumi without Nobunaga's blessings. Senshu Suetada and Sassa Masatsugu were killed fighting at Narumi.

May is the month that Nobunaga was born and I have decided to share some of his greatest triumphs in his career, Nagashino. Matthew Stavros's Military Revolution in Early Modern Japan has translated some of Ota Gyuichi's Shincho-Ko ki's Nagashino. I was able translate the Nagashino section earlier this year and was quite pleased with it. Here is Mr. Stavros's version:

"Upon our arrival at Nagashino on the eighteenth day, Lord Nobunaga set up a base at Gokurakuji temple on a mountain in the village of Shitara. Nobutada camped at Mt. Niimido.

The village of Shitara sat on land slightly lower than its surroundings. About 30,000 soldiers could take up position there and avoid detection from the enemy army of Takeda. Lord Tokugawa Ieyasu established camp at Mt. Takamatsu at the top of the Koromitsu incline. Takigawa, Hideyoshi, and Niwa made camp at Arumihara. Altogether, the forces allied with Nobunaga were arranged so as to surround the enemy, Takeda Katsuyori. Nobunaga thought, 'With the Takeda so close and backed up against a great river, this is a fine blessing from heaven. We must destroy them all!' 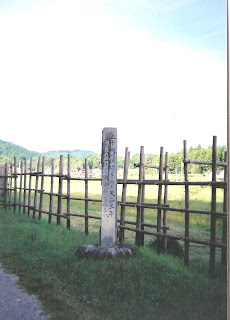 Calling Sakai to his side, Nobunaga pulled about 2,000 archers and skilled gunmen from Ieyasu's troops. He placed these men in Sakai's charge. Just after six o'clock in the morning, troops [of Nobunaga] having reached the top of the mountain, raised their flags high and shouted battle cries. Watching the enemy from atop Mt. Takamatsu, Nobunaga issued orders not to take action until his signal was given. He then ordered about a hundred infantry gunners into formation so as to receive the approaching enemy.

In the first wave, an enemy general, Yamagata, gave the signal and hit the drum, sending his troops charging forth. They were all either immediately cut down or sent back by gunfire. A second wave of infantry troops came forth. Again, in accordance with Nobunaga's orders, fire rained down, forcing more than half of them to retreat. 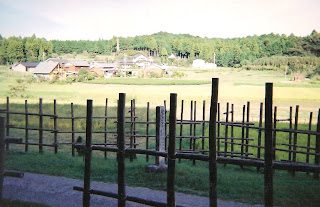 In the third wave, fighters from Nishi Kozuke sallied forth. Kanto soldiers tend to be skilled horsemen. They rode forth, pounding their drums. Here too, Nobunaga's gunners remained in formation, well hidden, awaiting the approach of the enemy. Each wave of fire would bring down more than half of the charging enemy. The rest fled. 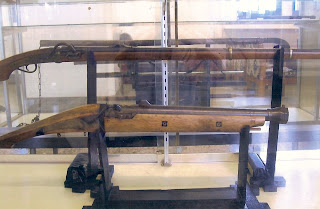 In this way, Nobunaga's troops remained stationary despite the enemy's charge, answering their attack with fierce infantry gunfire. The Takeda army was overwhelmed by this [tactic], left with no choice but to retreat. 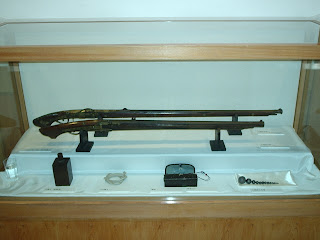 The forth wave came from the forces of Baba Minonokami, again sounding their drums. But again, Nobunaga's lines remained tight answering the assault with gunfire. Most[of the enemy] were cut down.

From sunrise until about two o'clock in the afternoon, fighting continued in the east, northeasterly direction. The Takeda army was badly struck until only a few of them remained. Finally, the various bands gathered around Katsuyori and fled..."

The entire text was not published in Stavros's article and some things are left out. That being said, it does give the reader on what might have happened on that day when Nobunaga and Ieyasu gave the Katsuyori an old fashioned butt kicking. Nobunaga arranged his troops close as possible to the enemy. Why? So the Takeda army did not have the ability to maneuver freely and it would be at a great disadvantage.

This is a letter that Nobunaga wrote to Kobayakawa Takakage and Mori Terumoto in late 1573.

"I forced Yoshikage to commit suicide and sent his head up to the capital. I took the majority of his remaining troops into my service, and with the whole province [of Echizen] being pacified, I ended my campaign there. I left behind district heads and quickly returned to northern Omi on the 26th [22 September]. I immediately attacked the castles of the Azai on the night of the 27th, which I captured the next day; I took the heads of father and son Azai, which I also sent to Kyoto so that the people of that town and its environs could admire them. It was due to the manipulations of the Azai that the Takeda from Kai Province and the Asakura clan from Echizen Province became my enemies in recent years. The Azai were also to blame for the treasonous ambitions of the shogun. You cannot imagine my happiness that I have slain them all, for I hated them deeply. If this current situation prevails, I will [shortly] incorporate Kaga and Noto into my domains. I have been on good terms for many years with Uesugi Kenshin from Echigo, so there will be no problem. As far as the Northern Provinces are concerned, they are completely under my command. Shingen from Kai has died from a disease and his succession will be a difficult task."

The heads of Asakura Yohikage, Azai Hisamasa, and Azai Nagamasa were sent as proof and a warning to those who are against Nobunaga. Proof that the three are dead and the Kyoto population can see the truth for themselves the bloody trophies. The warning was direct and head on. If were an enemy of the Demon King, this is the treatment you will receive. In the end, it was a perfect example of psychological warfare. 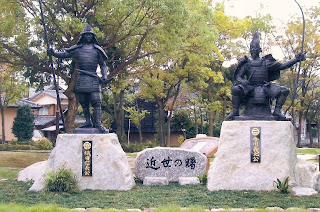 In March Mr. Yukio Kajino sent some information regarding souces written in the Edo Era relating to the Battle of Okehazama. Here are three and all three authors came from Nobunaga's home domain of Owari.

As for the Okehazama Kassenki, it could be the first chronicle related to the battle that is not from the standard sources (Shincho-Ko ki, Shinchokoki, Bukoyawa, or the Mikawa Monogatari).

As for the 2011 Arimatsu Okehazama Festival, it will be held on May 15.

Nobunaga no tame!
Posted by otsuke at 5:34 AM No comments: