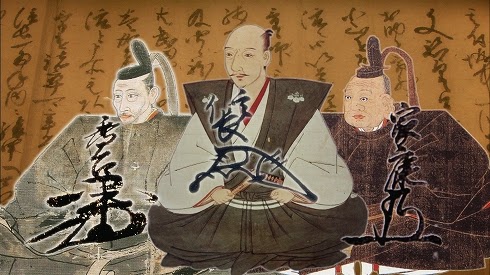 There is a television program that will be aired on the writings of the Big Three: Nobunaga, Hideyoshi, and Ieyasu.

As for the Uesama, you are more likely to reprimanded by him.  A word for the wise:  Just do not get into trouble with the Uesama or else. 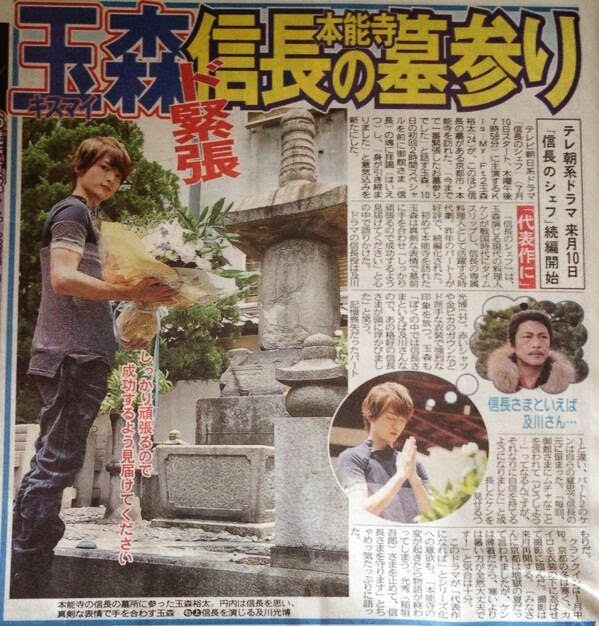 Tamamori Yuta, the actor in the drama Nobunaga no Chef prayed for success at the Honnoji in Kyoto. Good move on his part since you can always use help from the Uesama.  Would like to see Yuta pray at Kenkun Jinja as well.  The second season of Nobunaga no Chef starts in July.

Nobunaga no tame!
Posted by otsuke at 6:16 PM No comments: 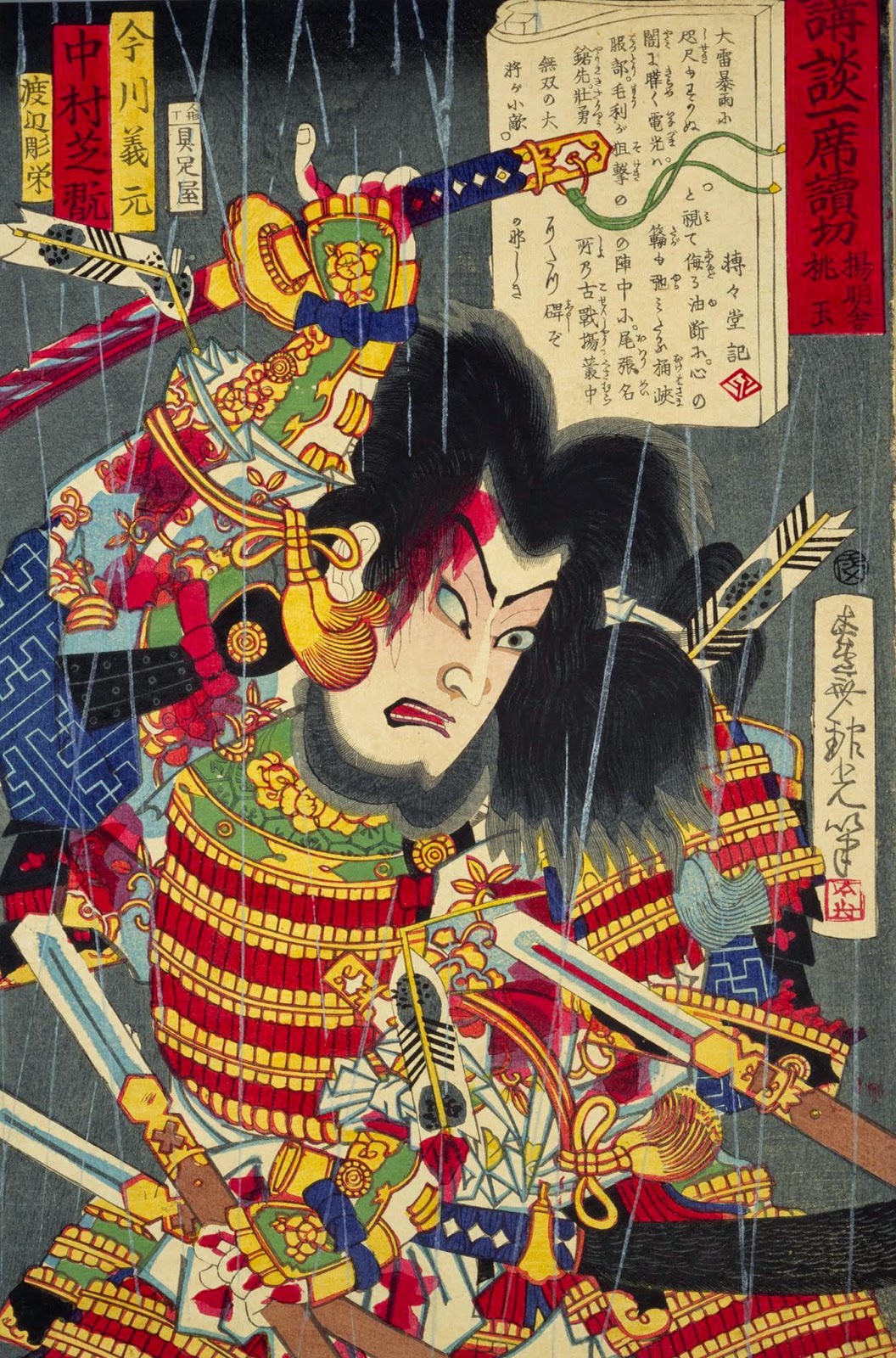 This is a nishiki-e or multi-colored woodblock print of Imagawa Yoshimoto by the artist Adachi Ginko.  The Kabuki actor's facial expression is known as mi-e.  I do have some interesting information on the Battle of Okehazama.  According to historian Ebata Hidesato, a year before the Battle of Okehazama (1559), Suruga suffered a famine.  http://kagiya.rakurakuhp.net/i_676771.htm

If this was true that Suruga did suffer a famine in 1559, the most likely scenario would have been the Imagawa would have purchased rice from Mino that was shipped from Ise to Okazaki or Sunpu.  I am skeptical on this theory and more research is needed to convince on this.  Then again, the Imagawa were planning to expand their control towards the west for years.  Yoshimoto and his advisers would have planned for something like this.

Tenka no tame!
Posted by otsuke at 7:23 PM No comments:

There is another theory out there that Mitsuhide knew about the letter.  At first, Nobunaga and the Chosokabe deal was not going to work out.  However, Nobunaga changed his mind and wanted to work with the Chosokabe.  That being said, both Mitsuhide and Toshimitsu planned a deal on their terms, not on Nobunaga's.  This letter mystery still and will be debated for awhile.

Nobunaga no tame!
Posted by otsuke at 5:51 PM No comments: 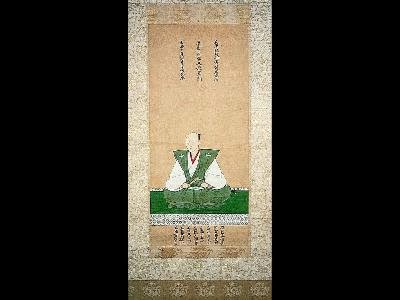 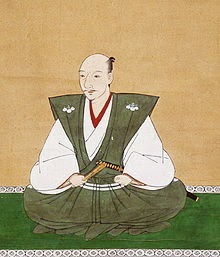 This is a portrait of Oda Nobunaga painted by Kano Motohide (Soshu) on the order by Yogo Kyu Saburo Masakatsu in 1583, a year after Nobunaga's death.  The painting is a national cultural treasure and it is located at Chokoji Temple Toyota City, Aichi Prefecture.  This is one of the most common portrait of Nobunaga in history books and magazines. 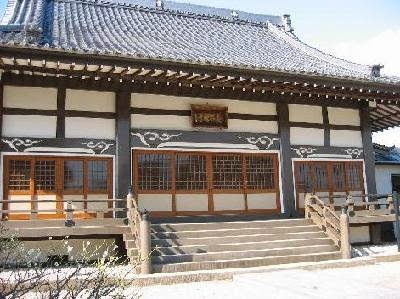 Chokoji Temple that was burned down in 1567 by Nobunaga and his army.  Eventually, it was rebuilt. 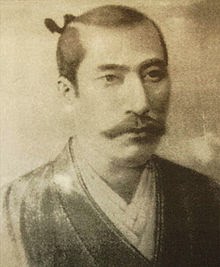 Now this is supposedly a portrait of Nobunaga by an Italian Jesuit Giovanni Niccolo.  However, there is a theory that is a picture of an Oda descendant taken in the early Meiji Era. 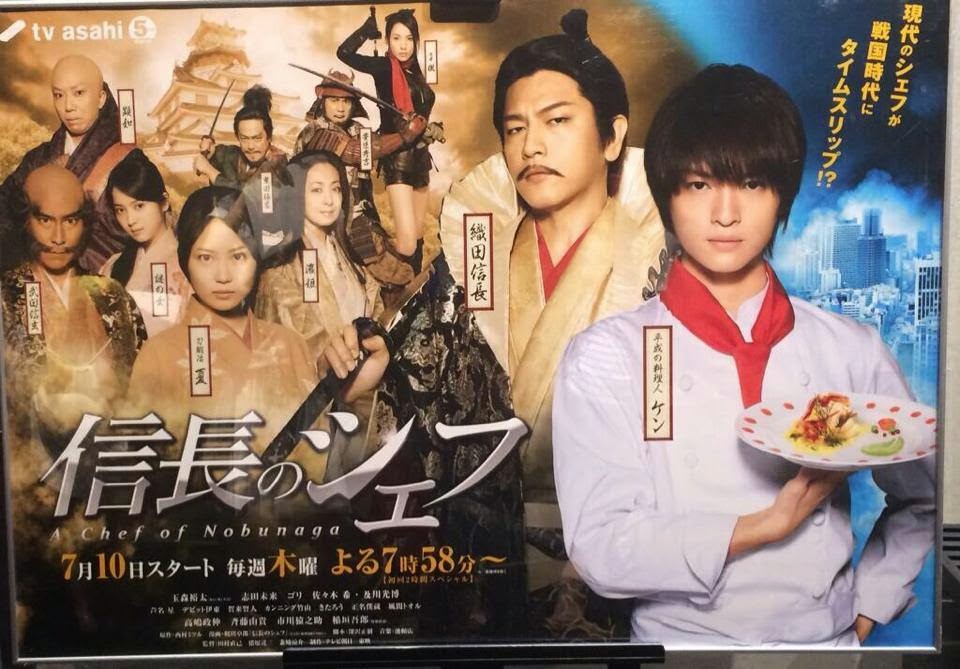 Here is the cover for the second season of Nobunaga no Chef.  Besides Nobunaga, Ken, and Natsu, there are some new characters.  Nobunaga's wife Nohime and Takeda Shingen will appear on season two.  The series will air on Asahi TV in July.

Nobunaga no tame!
Posted by otsuke at 4:13 PM No comments:

There is a letter by Nobunaga written in 1557.  It is on display at a museum in Nagoya.

If you ever have the chance to visit Fukui, make sure the ruins of Ichijodani Castle is on your agenda.  Built in 1471, it was the home of Asakura family until Oda Nobunaga put the castle town to the torch in 1573.  That same year, Nobunaga banished shogun Ashikaga Yoshiaki.  During the Onin War (1467-77), many of Kyoto's court nobles and intellectuals moved north making Ichijodani, Kyoto of the North.  It was a major cultural, military, and population center in Sengoku Japan.

The ruins are beautiful and there is a reconstruction of a Sengoku village across the street from the ruins.  I highly recommend that you visit the village.  It will give you an idea what life was like at Ichijodani.  Once Nobunaga burned the place to hell, the area was forgotten.  In 1575, Shibata Katsuie moved to Echizen.

Nobunaga no tame!
Posted by otsuke at 1:42 PM No comments: 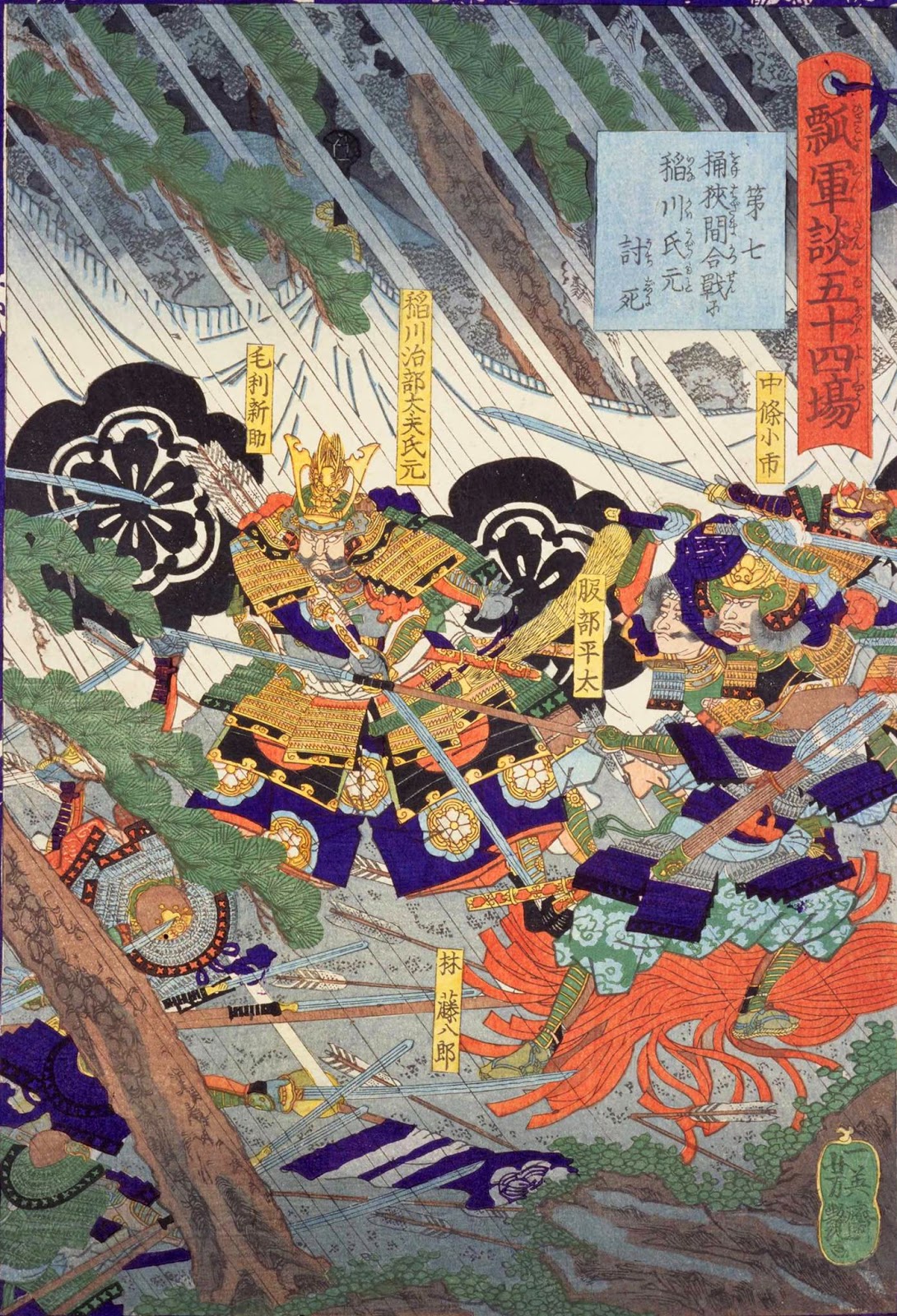 My good friend Mikawa Hide's blog has a post on the 2014 Toyoake Okehazama Festival.

At the festival, there was a military procession, kids wearing samurai armor, and a reenactment of the battle.  The ladies were beautifully dressed as Sengoku princesses.  I have to admit, I am jealous that I am not there.  As a scholar and a historian of the Battle of Okehazama, this is one festival I would love to see and participate.  Many thanks to Hide and his blog for providing beautiful and rich pictures. 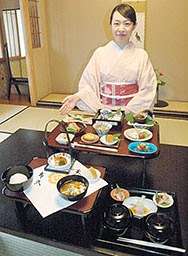 There is a special Nobunaga meal being served at Ryokan Usho No Ei Sagiyama in Gifu City.  The ryokan is located near the Nagaragawa River.  From the picture above, the food looks delicious.  Sengoku Busho cooking/dining sets are increasing throughout Japan.  A lot of it is due to promoting tourism in the local areas.

Nobunaga no tame!
Posted by otsuke at 3:35 PM 5 comments:

Nobunaga no Chef I 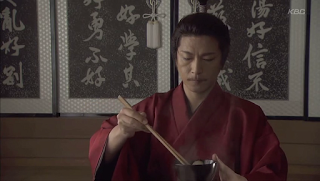 The television drama Nobunaga no Chef is back in the news again.  The second season will air on 10 July on Asahi TV at 8 p.m.  This is good news in my opinion because the first season was actually decent.  From what I understand, Nobunaga's wife Nohime and Takeda Shingen will make an appearance this upcoming season.  I actually read the Nobunaga no Chef comic on my way to Japan last year.  It is different for sure.

On the Okehazama front, I have been rereading Owada Tetsuo's Okehazama no Tatakai on Matsudaira Motoyasu's (Tokugawa Ieyasu) delivering the supplies to Odaka Castle.  There are several sources with different dates of the year when he delivered the supplies.  I have translated and written down the sources and plan to post them soon.  Both Ota Gyuichi's Shincho-Ko ki and Oze Hoan's Shinchoki has 1560 as the year that Motoyasu delivered the supplies to Odaka Castle.  But there is more and there is some surprises.

Today is a somber day as we remember that the Uesama was betrayed by Akechi Mitsuhide and took his life at the Honnoji Temple in Kyoto 2 June 1582.  Nobunaga fought gallantly to the end even though he knew it was a lost cause.  I have a post from about four years ago on Luis Frois written account on the Honnoji Rebellion: http://otsuke.blogspot.com/2010/06/honnoji-by-luis-frois.html 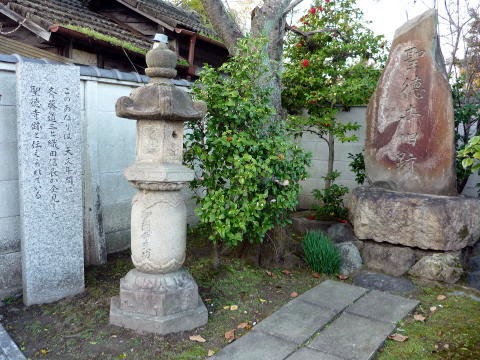 In early 1553, Nobunaga had a meeting with his father-in-law Saito Dosan of Mino at Shotokuji in Tonda near the Owari border.  It was the first time the two met in person and it would be a memorable one.  Dosan realized that Nobunaga was no fool and knew someday his son-in-law would be the man who could conquer Japan.

Shotokuji Temple's origins originated in the Haguri district of Owari.  However, in the Eisho Era (1504-21) the temple moved to Owari's Nakajima district in Tonda.  Shotokuji often moved either due to floods or flames of war. The area where the Shotokuji meeting took place is debatable.  I have seen Tonda, Tomida, and Toda as the area where the meeting took place.  Ota Gyuichi's Shincho-Ko ki has it Tomida, while Oze Hoan Shinchoki has it written as Tonda.  A lot of my Nobunaga books has either one of the two.

For more additional information on the famous 1553 meeting, please see this link:  http://otsuke.blogspot.com/2007/12/meeting-part-1.html

Tenka no tame!
Posted by otsuke at 4:03 AM No comments: