Here is an excerpt from the Okehazama book.

The next day Nobunaga was up at dawn and the first thing he did in the morning was to sing his favorite Noh play Atsumori, which runs, "Man's life is fifty years. In the Universe what is it but dream and illusion?" Is there any who is born and does not die?" In Japanese: "Ningen gojuunen, geten no uchi wo kurabureba, Yumemaboroshi no gotokunari, hitotabisho wo ete metsusenu mono no aru beki ka."

It was allegedly noted that Nobunaga held a fan in his hand. His lovely wife Nohime, played a hand drum. His voice was low and grave and she was shedding tears while playing the hand drum. The famous portrayal sounded romantic enough to make it authentic. Whether or not Nohime was there during her husband's finest hour, one act was true. He was preparing for war and for his death.

He was known to be found of songs, especially of Kowaka Atsumori and was skilled novice of several arts. There is a theory that Nobunaga sang the verse three times before heading off to war. The song and play itself was related to the Heike Monogatari. In the movie Kagemusha, Nobunaga sang Atsumori just before receiving news about Takeda Katsuyori's attack on Nagashino Castle. While singing Atsumori, it can be said he was arranging himself for a crucial confrontation with death.

Nobunaga was prepared for death and he was prepared for it spiritually. He was quoted in the Shinchoo-Koo ki saying, "Blow the conch horn! Bring the armor!" (Horakai wo fuke! Bugu wo Yokose!) It must have been a restless and wild atmosphere at Kiyosu Castle with people mobilizing for war at the last minute. He put on his armor, had breakfast (consisted of rice gruel), sounded the conch horn, and went on horseback with a few men.

Then Nobunaga got on his "Tsukinowa" and departed. According to Sugimoto Sonoko, the horse was chestnut colored and Nobunaga carried his "Honsho Masamune" sword with him to battle. The few men he departed with were Iwamuro Nagato, Hasegawa Hashisuke, Sawaki Touhachi (Maeda Toshiie's younger brother), Yamaguchi Hida, Gato Yasburo. The five men and their pages journeyed along with Nobunaga.

Nobunaga no tame! Tenka no tame!
Posted by otsuke at 3:47 PM No comments:

Here is the continuation of Nobunaga's army around 1560.

I will write about Nobunaga's army before and around the Battle of Okehazama. It was small at the time. However, it grew big when he had Japan to himself.

It starts off with Nobunaga on top.

Renshi (Brother of a nobleman)

Hatamoto (Direct vassals to Nobunaga. This is the largest group in Nobunaga's army)

During this time period, almost of Nobunaga's army came from the home province of Owari. They were familiar with Nobunaga and his tactics. There were no outsiders during this period.

The Hatamoto consisted of Nobunaga's horse guard units, pages, the adult group, and the Red and Black Cowl units.

The Horse Guards (Umamawari) according to Lamers, served two important duties. They were Nobunaga's storm troopers and bodyguards (Lamers, Japonius Tyrannus, p. 31). Lamers also stated that the Horse Guards were created after Nobunaga took full control of Kiyosu Castle in 1555 (Lamers, p. 30). As for the Red/Black Cowls, they were the elite unit in Nobunaga's Horse Guards.

As you can see Nobunaga started out small then the army became larger once he obtained more power. The information stated above is the start (Before and After 1560).

Taniguchi Katsuhiro's Nobunaga no Shineitai is a great book on Nobunaga's bodyguards. A must have.

If anybody knows professional editor, by all means let me know. Thank you.

looking for an editor

I am looking for an editor who can edit the 2nd edition of my Okehazama book. Someone who knows Oda Nobunaga, Imagawa Yoshimoto, Okehazama, and Sengoku Japan. I just need the kinks to be weeded out. I am proud of the work I have done. To tell you the truth, I do not think anybody could have done better. I felt I was right there at the heat of the battle. I am willing to bend, not break. Anyways, this is not a rush. It will take months. If anybody is interested,please let me know.


Nobunaga no tame!
Posted by otsuke at 6:02 PM No comments: 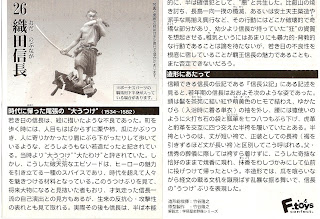 The more I read up on Nobunaga's youth and days as a young man I am convinced he was redneck. However, in my opinion the cut off date when his hillbilly days were over was in 1568 when he arrived in Kyoto. You have to read both Ota Gyuuichi and Oze Hoan's Shinchoo-Ko ki to really understand Nobunaga.

Also in my opinion historians do not spend enough time around the Gifu, Nagoya, or Okazaki area. If you spend some quality time there, you will find out very quickly it is a country city. When Nobunaga was alive and running, many did not understand the psychology of the man. Few did and Saito Dosan was one of them. He knew Nobunaga was a redneck country boy, but knew his rare talents. Many today just do not understand Nobunaga's psychology.

He was often in the open country shooting his gun and learning how to live. His clothes were outlandish, but he did not care. The countryside provided Nobunaga with everything he needed. Fruits, vegetables, and wild animals.

I just love the fact he would cram rice cakes and anything he could grab his hands on. I love his free spirit attitude which many Sengoku warlords hated. One must remember that his redneck lifestyle made Nobunaga a self-made man.

By 1568 things changed in my opinion. He was still a self-made man from Owari. However, Nobunaga set himself on national stage when he arrived in Kyoto. That is when I will stop using the word redneck. You have to be flexible.


Nobunaga no tame!
Posted by otsuke at 11:27 AM No comments:

I have received some harsh criticism for using the term "redneck" in my Okehazama book. For the people who think they know Oda Nobunaga, you have a problem. You do not know Nobunaga. I think they are jealous because he did not walk the line and did what ever he wanted. Nobunaga was very independent minded. That is the truth.

While other samurai were doing their training the standard way, Nobunaga did it "His Way." He was able to fish, hunt, swim, ride horses, sumo, hawking, mock battles, and the way of the gun. Nobunaga was not often around the castle grounds when he was young. His real education came from the outdoors. The country provided Nobunaga everything he needed to survive in a hellish Sengoku Japan.

Nagoya during the time of Nobunaga was small. Once leaving the castle grounds was open country. He was able to do anything he wanted without any of his senior retainers nagging him for useless nonsense. I think people tend to forget that Sengoku Nagoya was a country town. That includes Kiyosu and Komaki. He was able to be himself. Rednecks tend to be free spirit and independent minded people. A lot of people these days resent that attitude. Remember his diet? He love strong tasting country foods. Brain food! I have to admit one of the main reasons why I adore Nobunaga because he always able to say "Screw you!" to the higher authority. Read about his youth. It is simple to understand.

This is all for now. I will write more on the this subject later in the week.

I found this site just a couple of days ago. This site kicks ass. It has many colorful photos and the like. Check it out.

I have just finished writing a two page fiction about Nobunaga and Atsumori. Still debating whether I should send it to the SA or post here on the web.

Nobunaga no tame!
Posted by otsuke at 4:14 AM No comments: 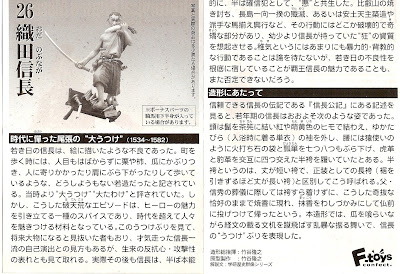 My toy figure finally arrived and I am a very happy man. The figure is small, but who cares. The toy figure is made by F-toys.

I bought the "utsuke" Nobunaga because I am really interested in Nobunaga's youth.

I will write and defend my term "redneck" to describe Nobunaga's behavior and lifestyle. However, I will concede the term when he arrives in Kyoto in 1568 with the 15th and last Ashikaga shogun Yoshiaki.

Like it or not, Nobunaga was a redneck. That is the truth.

Here is some of the best of 2008 reading list. There were many and could not include all.

Nobunaga no Hitsugi by Kato Hiroshi

Nobunaga no Shireikan by Katsuhiro Taniguchi

Nobunaga no Shineitai by Katsuhiro Taniguchi

The Signore by Kunio Tsuji

Nobunaga no Sensoo by Fujimoto Masayuki

There were many more that I have read and enjoyed. I know for a fact that 2009 will have plenty of good reads.


Nobunaga no tame!
Posted by otsuke at 4:09 AM No comments:

Happy New Year to all!

The best New Year for Nobunaga was in 1574 at Gifu Castle.

The skulls of Azai Nagamasa, Azai Hisamasa (Nagamasa's father), and Asakura Yoshikage were lacquered in gold. I wonder what was going through the minds of Nobunaga's men when they had to drink up. Now that is how you celebrate a New Year!

You can find this information in Ota Gyuuichi's and Oze Hoan's Nobunaga books.

I wish the U.S. would something similar to the heads of Bin Laden, A-Jad, Hugo Chavez, and any other thug in the world.

Tenka no tame! Nobunaga no tame!
Posted by otsuke at 7:24 AM No comments: