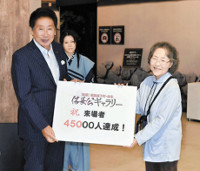 There is some big news regarding Gifu's Nobunaga Gallery.  Over 45,000 people have visited the Nobunaga Gallery so far in about a month.  The attendance keeps increasing as the word spreads out and this in general keeps Nobunaga as the top dog as the most popular historical figure in Japan.

Nobunaga no tame!
Posted by otsuke at 8:21 AM No comments: 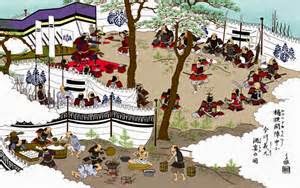 I found an interesting article on the Battle of Okehazama yesterday.  The article briefly states Nobunaga's tactics, the two battlefields (Arimatsu and Toyoake), Yoshimoto's goal, and a letter to the Ise Shrine.  It appears that one of Yoshimoto's retainers from the Sekiguchi/Sena family wrote a letter two months before the Battle of Okehazama to Ise Shrine stating that the Imagawa will unite the Tokai region and will be even stronger with Owari in their hands.

The Sport is War 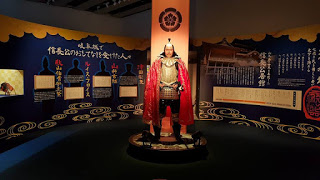 "The sport is war total war
When victory's a massacre
The final swing is not a drill
It's how many people I can kill."

This was true during Nobunaga's career as well as other Sengoku warlords in 16th century Japan.  It was the age where bloodshed was king and the sword ruled the land.  From Okehazama to Nagashino, Nobunaga killed the enemy as much as can.  It did not matter if they were killed on the battlefield, assassinated, or starved to death.  During the Battle of Okehazama, taking heads were not necessary during the heat of the battle.  That was for later.  Nobunaga was quoted as saying, "Kill and keep moving!"  In this sense, kill as the enemy as much as you can.

Nobunaga no tame!
Posted by otsuke at 1:56 PM No comments: 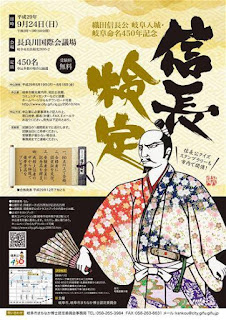 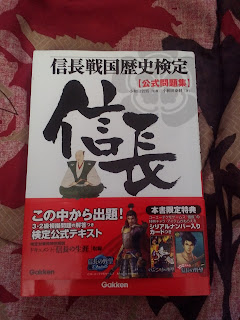 Here is the flyer for the Nobunaga Kentei which will be held at the Nagaragawa International Hall in September.  As for myself, I would love to take this test.  For those who are planning to take the test, I have the perfect study guide.  The Nobunaga Sengoku Rekishi Kentei is the study guide to use to prepare for the test in my opinion.  The book will at least give you a leg up over your opponents who plan to take the test.

Posted by otsuke at 5:51 AM No comments: