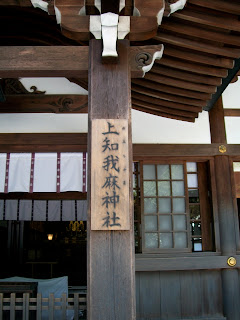 Early this morning while on Facebook, my good friend Hideyasu from Mikawa-hide posted an article that caught my attention right away.  When Nobunaga stopped at Atsuta Shrine to pray for victory during the Battle of Okehazama in 1560, he supposedly prayed at Kami Chikama at Atsuta Shrine.  According to my friend's post, this picture you see here is not at its original position.  Kami Chikama was located about 150 meters south of the shrine during the Sengoku Era.  The shrine was moved to its current location in the 24th year of the Showa or 1949.  Unfortunately, there is not landmark at its old position.

"Nobunaga and his following, six horsemen in all, quickly covered the three leagues to Atsuta.  When Nobunaga stood in front of the Gendayu Shrine (another name for Kami Chikama) at the Hour of the Dragon [around 8 a.m.] and looked to the east,...."

Nobunaga no tame!
Posted by otsuke at 8:27 AM No comments: 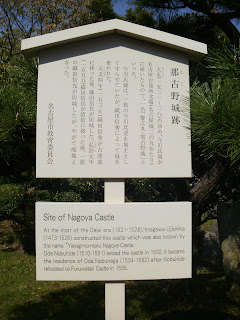 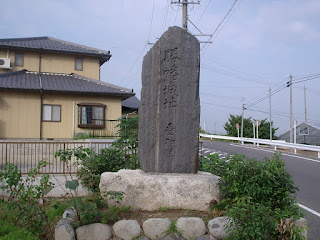 Back in 1532, Nobunaga's father took over Yanagi no maru after he banished Imagawa Ujitoyo (Imagawa Yoshimoto's younger brother) during a linked haiku party.  After he got rid of Ujitoyo, the castle was renamed Nagoya. This makes Nagoya as Nobunaga's birthplace.  His birth date is also is question.  He was born in 1534, but the dates are many.  May 12 is the standard, but the 11th and 28 is also noted.

As stated above, I think Nagoya is the birthplace of the Uesama.  It just makes sense since it was the strongest castle at the time under Nobuhide's control. More importantly, it was centrally located in Owari surrounded by other Oda castles.  Another factor is historian Owada Tetsuo.  His work on Nobunaga has him always listed the birthplace Nagoya and usually trust his work.

The debate still goes on today and I am very flexible enough to know that Shobata Castle might be Nobunaga's birthplace. However, I am still not sold on it at the time being.  Nagoya for now.

Tenka no tame!
Posted by otsuke at 8:22 PM No comments:

There will be a new book on the Battle of Sekigahara out very soon.  Mr. Chris Glenn is the author of the book and here is the link: http://www.sekigaharabook.jp/

Tony Bryant's book Sekigahara 1600: The Final Struggle For Power is the English standard bearer.  It is very good and highly recommended.  I learned a lot from Tony's book and and used his book when visiting the battlefield in 2000-1.  Without his book, I would have never known about Sekigahara  Warland.  I highly recommend a visit there, even if it is a bit tacky.  His book was the real motivator to visit the battlefield in the first place.  Thanks Tony.

The big question now is what will Chris bring to the table?  If it is true and his book will bring a new fresh take on the battle with new information and tidbits, then it will be a success.  I hope so.  One of my main concerns will be the bibliography.  Is the bibliography going to be both English and Japanese with current and reliable works from the big shot historians such as Owada Tetsuo and the gang.  Again, I hope so.  When I was writing my book on the Battle of Okehazama, I made sure I had the most reliable sources I had in both languages.  To tell you the true, it was not easy.

Nobunaga no tame!
Posted by otsuke at 1:57 PM 2 comments:

Siege warfare is not pretty.  It is nasty, cruel, dirty, yet effective and neccessary.  This passage from David D. Neilson's Society at War explains it is over for those on the top.  Unfortunately, even the women and children were not immune from the Uesama's warpath to unification.

"On the seventeenth of January 1580, the wife of Besho Yamashiro gathered her three children, two boys and one girl around her.  She then took a knife and stabbed each of them to death before cutting her own throat.  Their deaths as well as those of a number of other prominent members of the Besho Clan were part of a negotiated peace settlement that ended a siege of their castle that had seen the garrison survive for most of a year after their food supply lines had been severed.  Those in the castle had been reduced to eating the bark of trees and digging for the roots of the grasses in order to survive.  Scenes such as this were not unusual during the early years of the unification process and were repeated throughout the realm as Nobunaga's rapidly expanding hegemony in central Japan began to show ambitions of going national in its scope."

If you were an enemy of the Uesama and he has you surrounded.  You were done. Forget about it and no questions asked. Many killed themselves so they will not be publicly humiliated while being executed.  Life at the top might have been great, but when it was over, it was over.  Nobunaga had to do anything it took to unify Japan and was successful at it.

Tenka no tame!
Posted by otsuke at 7:41 AM No comments: