News related to Nobunaga's cousin, Oda Nobuzumi on his castle Omizo.  According to the archaeological discovery at Omizo, the castle was built with the Azuchi method.  Omizo Castle was located on the western side of Lake Biwa.  With Hideyoshi located at the north with Nagahama, Nobunaga with Azuchi at the east, and Mitsuhide at the south with Sakamoto, it created a diamond around Lake Biwa.

Tenka no tame!
Posted by otsuke at 2:25 PM No comments: 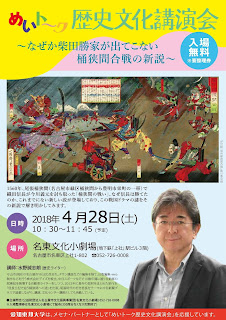 Okehazama and local Nobunaga historian Seishiro Mizuno will host a seminar on the Battle of Okehazama in April.  The seminar will be held on April 28th, at the Meito Cultural hall near the Nagoya subway station Kamiyashiro.  If you are in the Nagoya area during this time, by all means go.  His last seminar on the Battle of Inou and Shibata Katsuie was a huge success.

Nobunaga no tame!
Posted by otsuke at 9:39 AM No comments:

The Gunma Prefectural Museum of History will host a special exhibition Oda Nobunaga to Kozuke kuni.  Nobunaga and Kozuke domain will be held March 17th to May 13th.

Tenka no tame!
Posted by otsuke at 1:58 PM No comments: 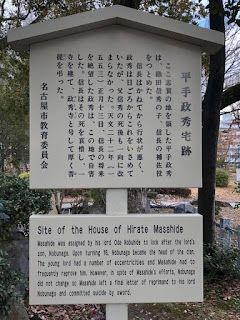 Shiga Castle was the home of Nobunaga's elder adviser Hirate Masahide (1492-1553).  Masahide excelled in diplomacy, poetry, and the tea ceremony.  While Nobunaga's father Nobuhide was still alive, he asked Masahide to work out a peace agreement with the Kiyosu faction in the late 1540s.  At first, it stalled, but Masahide eventually made the two parties agree to a deal.  More importantly, Masahide worked out another deal with Saito Dosan of Mino to allow Nobunaga to marry Dosan's daughter Nohime.  After Masahide's death in 1553, Nobunaga built a temple for him Seishuji.  His grave however was moved to Tounji.

Nobunaga no tame!
Posted by otsuke at 7:37 AM No comments: