What would Nobunaga do?

Man, we are heading into the Great Depression again! Would Nobunaga let Congress run around with their crazy shenanigans? Would Nobunaga let the government take over the economy? The is no. Nobunaga would take off the shackles that has been placed on the American public. First, he would cut the corporate tax to a low one. Ban the capital gains tax and death tax. In fact, let the free market system work itself out. Capitalism frees people, not suppress them.

Remember, Nobunaga was a warlord, not some Ivy college dope head. In fact, he is a lot smarter than most of the elites who seem to know everything, but reality, know nothing. Cutting taxes means people have more money in their pockets. He knew most of the common people were smarter with their own money than the government.

Congress today? Nobunaga would have put them to death.

By the way, the book should be available for the holidays.

Tenka no tame!
Posted by otsuke at 6:57 PM No comments:

Update on Nobunaga no Hitsugi

I found another copy of Hiroshi Kato's book, Nobunaga no Hitsugi at my local Japanese bookstore. However, it was not at the Book-Off branch. It was at some other bookstore inside Mitsuwa Market. I was planning to buy, however did not since book was in two volumes. I did not have the cash. There is a movie, Nobunaga no Hitsugi, and you can find it one ebay. Again, I do not own a copy of that yet. From what I read the movie has mixed reviews. Do I plan to own a copy? You bet.

As for my book, things are coming along. The editor is finalizing last minute details. If everything goes the book hopefully be ready for Christmas or earlier than that. As for my Okehazama fiction book, I am still looking for input. I am about 70% done on my rough rough draft.

Today is the 100th post. A little sake and matcha to celebrate.
More on Varley:

"A prerequisite to the study of this revolution/evolution is abandonment of the incorrect standard version of the Battle of Nagashino, which has long been given such prominence in both amateur and professional analyses of warfare in Japan's early modern age." (Varley, 120)

I do agree with Varley to a point. However, I do not think it is a good idea to abandon the standard in order to except the new theory. Nagashino and 1,000 rifles may be the flavor of today, but will it the flavor of tomorrow? I doubt it. The old theory of 3,000 has stood up for almost 400 years or more. Something has gone right.

I would use both theories and after a rigid analysis decide for yourself. Varley's work is new and bold and I like that. However, I need more information and convincing to get rid of the old and into the new.


Nobunaga no Tame!
Posted by otsuke at 4:44 AM No comments:

I would like apologize for not posting more often. Been busy of late. I am still rereading Varley's article. There is ton of rich information that needs to be answered. As for The Signore, my final answer is that the book, even though it is fiction, portrayed Nobunaga as a lonely man. One must remember that he put most of his energy to unite Japan. When you experienced a lot of backstabbing in your life, you tend not to trust people.

At the moment, I am writing a fiction novel on Nobunaga. It will take at least three months to finish the first draft. A word of advice to the current economic slump. Have plenty of cash, buy gold, and pay your debts off. As for the Okehazama book, the editing process is still going on. Little by little it will be done and published.

I finally received The Signore might have been a in the mail and the book was a knockout! It is a must read and should be on the must read list on Nobunaga. The book is fiction, but the accounts were factual. The book explains Nobunaga's human aspect through an Italian and he is not a missionary. Kunio Tsuji's book is a hit. The one thing that has struck me so hard was Nobunaga was a lonely man. Hard to believe. As for the Okehazama book, the editing is steady from what I know so far. Once that is done, off to the publisher. On a side note, I am working on a novel at the moment. Tell you later. More on The Signore in a later post.

Nobunaga no tame!
Posted by otsuke at 8:19 AM No comments:

Nobunaga to Hideyoshi to Ieyasu 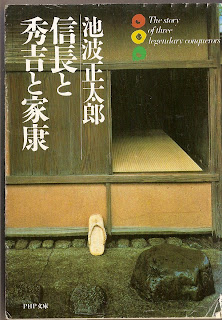 I bought Ikenami Shotaro's Nobunaga to Hideyoshi to Ieyasu book Tuesday at the San Diego Book-Off branch. Another steal, it was only a dollar! The book is very easy to read and can be finished in a hour or so. The book is written in a novel format without the dry academic bull. It starts off with a young Nobunaga explaining his history. After his death at the Honnoji, Hideyoshi takes over. What is so different about the book is that the heroes take over once they die. Ieyasu's story begins with the Battle of Sekigahara.

I am glad to buy such a book. A quick read for only a buck. You cannot beat that. From what I understand this book is popular since it has many editions.

We Remember 9/11 Seek and Destroy! Watch out UBL, Nobunaga is coming kill you!

Tenka no tame!
Posted by otsuke at 9:22 AM No comments: 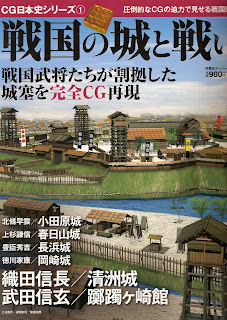 I bought this magazine early this Spring at Book-Off. It was a steal. Sengoku no Shiro to Tatakai by Futabasha, October 11, 2007 (CG Nihon no Shirizu 1). If you want to know how Sengoku Castles appeared during the 16th century, this is your best bet. They have most of the big guys. For example, Oda, Tokugawa, Hideyoshi, Takeda, Uesugi, and the Hojo. I find this magazine useful because I can get a picture what the castles looked like and how their enemies attacked them. They began as forts then became castles which they were famous for. Few exceptions. Kasugayama for Kenshin was a yamashiro(mountain castle) and Shingen Tsutsugasaki was a mansion surrounded by a moat.

The magazine also has illustrations how the armies fought and defended themselves. I love this magazine and it should be in every Sengoku freak library.

Nobunaga no Tame!
Posted by otsuke at 9:11 AM No comments:

I continue to write about Nobunaga and guns. I will use Jeroen Lamers, Japonius Tyrannus to tie in with the Varley article. "The number of 3000 harquebusiers first appears in Oze Hoans's Shinchoki, but the far more reliable and earlier Shinchoo Ko ki speaks of only 1000 harquebusiers" (Lamers, 112). Now I do not think he threw out Oze Hoan's work completely. I think it was a compare and contrast. You decide.

As for his source of information, look on page 245 and end note 242. Guess who shows up to the party? Fujimoto Masayuki. To tell you the truth, I smell a rat in the house. The only way his theory will stick if the Oda/Tokugawa army was less than the standard number. If the Oda/Tokugawa was 18,000 and the Takeda 6,000, then his theory has some credibility (Nobunaga's force of 10,000/1000 gunners).

However, if the Oda/Tokugawa army was more than the smaller number, then there was no way in hell Nobunaga would bring an army of less than 10% gunners. More later.

Tenka no Tame!
Posted by otsuke at 1:38 PM No comments: 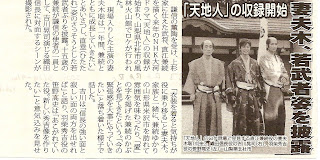 
Nobunaga no Tame!
Posted by otsuke at 4:16 AM No comments:

Paul Varley's article is so stacked with rich data you have to break it down sentence by sentence.
"Nobunaga, for example, fought relatively few open-field battles" (Varley, p. 111).

As for forts, Nobunaga his first battle in 1547 was attacking an Imagawa fort. Battle of Mikawa Kihara Ohama. His first taste of blood was a success!