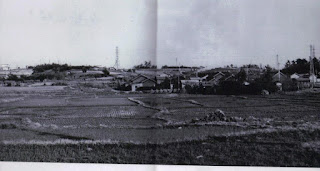 The Okehazama Battlefield mystery continues.  My good friend Mikawa Hide has just written a post on this on his blog.  http://ameblo.jp/mikawa-hide/entry-11471015084.html

Key points from Mikawa-hide's blog: Yoshimoto's main army and where Yoshimoto was killed.  Even a scholar like myself has a hard time which battlefield is the correct one.  I always suggest one must visit both the Arimatsu and Toyoake City battlefields in order to get a better understanding of the battle and the outcome.  One must remember that both battlefields are legit and have some sort of relationship with one another.  Yes, I do think the Arimatsu Okehazama battlefield is the correct place, but understand that Toyoake City is still a legitimate battlefield.  When you visit both battlefields frequently,  you will be surprised how much the relationship between them are important.

Tenka no tame!
Posted by otsuke at 6:30 PM No comments: 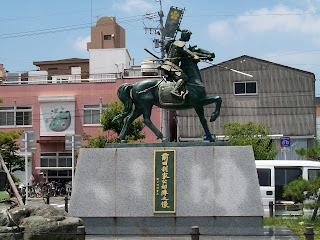 Maeda Toshiie (1537/38-1599) was born at Arako Castle in Owari and first served Nobunaga in 1551.  He made his baptism of fire at the Battle of Kayastu in 1552, where Nobunaga defeated Sakai Daizan and Oda Sanmi.  He also participated in the Battle of Okehazama, but made his fame to claim at the Battle of Moribe in 1561 where took the head of Kubitori Adachi who was known as Headchopper Adachi.  Toshiie was also one of Nobunaga's gun commissioners at the Battle of Nagashino in 1575.

"I was born into this tumultuous age and I participated in many battles and killed many of the enemy.  However, my killings were all done for good purposes. I have never killed or hurt anyone without good reason,...."

One must remember that the world that Nobunaga and Toshiie lived in, the sword was mightier than the pen.  Bloodshed was king.

Nobunaga no tame!
Posted by otsuke at 7:55 AM No comments: 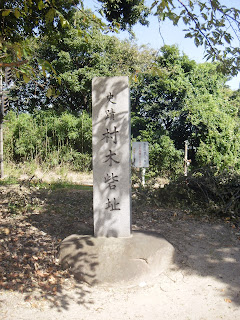 Today I will write the entire passage of the Battle of Muraki (1554) that is written in the Shincho-Ko-ki.

"Around that time, the Suruga forces stationed at Okazaki attacked and seized the stronghold of Yamaoka [Dengoro] in Shigiwara.  They brought up reinforcements from Okazaki and turned Shigiwara into a base operation directed against the castle of Mizuno Kingo [Nobumoto] at Ogawa.  Next the Suruga forces built a stronghold at a place called Muraki and entrenched themselves there.  The defenders of nearby Teramoto Castle presented hostages and declared themselves loyal to Suruga.  Their defection meant that Nobunaga's access routes to Ogawa had been cut.

Oda Kazusa no Suke Nobunaga intended to take the field, strike at the enemy's rear, and relieve Ogawa, but he was concerned lest his enemies in Kiyosu take advantage of his absence to attack Nagoya and set fire to the townspeople's residential quarters there.  He therefore sent his father-in-law, Saito Yamashiro Dosan, a request to provide him with military support in the form of a temporary garrison.

On the 18th of the First Month, [Tenbun 23 (1554)], Dosan dispatched about a thousand men to guard Nagoya Castle in Nobunaga's absence.  This force was commanded by Ando Iga no Kami [Morinari], who was assisted by Tamiya, Koyama, Ansai, Kumazawa, and Monotori Shingo.  Dosan had instructed these men to send him daily reports of their observations.  All the reinforcements reached Owari on the 20th of the First Month.  Nobunaga had them pitch camp at the hamlets of Shiga and Tabata, not far from Nagoya.  That same day he came to inspect their encampments and paid his respects to Andi Iga.

The next day, just when Nobunaga was ready to take the field, his first house elder, Hayashi Shingoro [Hidesada], and Hayashi's younger brother brother, Mimasaka no Kami, suddenly declared their dissatisfaction and withdrew to the fort of their auxilary Maeda Yojuro at Arako.  When Nobunaga's remaing house elders asked him what he was going to do now, he assured them that whatever had happened, everything was fine with him.  So the operation began.  That day Nobunaga rode a horse called Monokawa.  He spent the night of the 21st of the First Month in Atsuta.

On the 22nd, an extraordinary violent storm raged.  'Your Lordship cannot possibly cross the sea today,' the local sailors and helmsmen told Nobunaga.  'Their must have been a similarly strong wind wind a long time ago,' he replied, 'when the Minamoto generals quarreled over the back oars at Watanabe and Fukushima.  I absolutely have to make the crossing today, no matter what, so bring out your ships.'  Defying reason, Nobunaga made the crossing roughly twenty leagues [eighty kilometers] in barely one hour.  That day he had his men pitch a field camp, while he himself went directly to Ogawa to meet with Mizuno Shimotsusuke no Kami [Nobumoto].  After having been briefed in detail on the situation in the area, Nobunaga spent the night at Ogawa.

On the 24th of the First month, at first light, Nobunaga left Ogawa in order to launch an attack on Muraki Castle, which was held by Suruga forces.  The north side of this castle was fully protected by a natural barrier and was therefore left undefended.  On the east was the main entry, while the postern was on the west.  The south side was heavily fortified and protected by a great moat.  The moat, engineered carefully--its bed had the contour of a turtle's belly--was so wide that one could barely see the other side.  Kazusa no Suke Nobunaga himself took responsibility for the south side of the castle, the most difficult point of attack, and assigned his troops their objectives.  His young samurai competed with one another in trying to scale the battlements; if they were pushed off, they immediately scrambled back up, suffering heavy casualties in killed and wounded.  After moving to the edge of the moat, Nobunaga stated that he would take it upon himself to silence three enemy loopholes and kept them under constant fire by exchanging one loaded harquebus for another again and again.  Because Lord Kazusa no Suke was issuing orders to them in person, his men vied with each other to excel.  Inspired by his presence, they rushed to the assault, seized the moat, and cast down anyone and anything that stood in their way. The rear gate on the west side was Lord Oda Magosaburo's objective, and his men,too fought their way toward the castle.  The first to force his way into the outer ring was Rokushika.  The main gate on the east side was the objective of Mizuno Kingo.

The men inside the castle put up a peerless defense, but Nobunaga's relentless assault produced so many casualties, gradually decimating the defenders, that in the end they surrendered, presenting various apologies.  To finish them off to the last man would have been standard operating procedure.  But the dead and wounded already lay in heaps; moreover, dusk had fallen.  So Nobunaga instructed Mizuno Kingo to comply with the prisoners' pleas for mercy.  A countless number of Nobunaga's pages and other leading retainers were among the casualties, a sight too horrible for the eyes.

Nobunaga had opened the assault on the castle at the Hour of the Dragon [around 8 a.m.] and continued attacking until the Hour of the Monkey [around 4 p.m.], when the issue was settled to his contentment.  He returned to his field headquarters, where he issued orders regarding this and that while tears of joy streamed down his face.  The following day, Nobunaga conducted an operation against Teramoto Castle.  He set fire to its foot and then returned to Nagoya from his campaign.

On the 26th of the First Month, Nobunaga went to the camp of Ando Iga no Kami to thank him for his assistance on this occasion.  On the 27th the reinforcements from Mino departed.  What Ando Iga no Kami later briefed Dosan in detail on Nobunaga's words of thanks, on how he had crossed the sea in a raging storm, and on the outcome of his attack on Muraki, Dosan is reported to have said, 'That man scares me.  What a pain to have him as a neighbor!'"

Tenka no tame!
Posted by otsuke at 6:15 AM No comments: