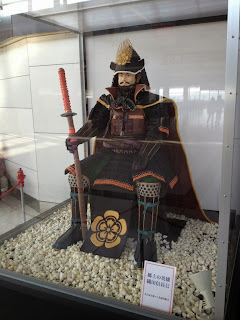 The Japanese are known for their unique art and this Nobunaga statue made out of wagashi (Japanese sweets) proves it.  That is right, the statue is made out of Japanese sweets. The Wagashi Nobunaga statue is located near the information desk at Nagoya International Airport.  Actually, it was done in good taste.  The armor and sword looks real, but wish that he was holding a matchlock rife because Nobunaga was known for his use of firearms.

I leave for Japan next week and will give a small tour of Gifu to a few friends of mine.  The tour will include Saito Dosan and Nobunaga's role in creating Gifu/Mino into a major province.

Nobunaga no tame!
Posted by otsuke at 7:43 AM No comments: 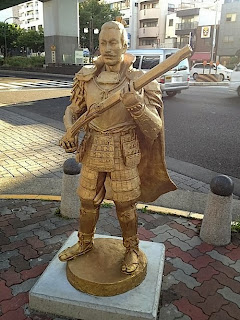 A good friend of mine Nate Ledbetter has written a great blog post on the Battle of Nagashino and it includes a beautiful video.  http://sengokufieldmanual.blogspot.com/2013/10/rest-in-peace-original-nagashino.html  Mr. Ledbetter has probably done more ground breaking work on the Battle of Nagashino than anybody out there in the past few years.  He has used his military experience and skills to break down the battle to the tactical level.  Once you see the video, you will clearly understand that Takeda Katsuyori failed on the tactical and the intelligence level.

The video includes some of the problems of the primary sources like the Shincho-Ko ki, Shinchoki, and the Koyo Gunkan.  Somewhat have to be taken with a grain of salt.  One of the main problems with these texts is that they are not perfect.

My favorite part of the video has to be where Mr. Ledbetter breaks down everything to the military level.  He uses a doctoral template and practically tells the viewer that most historians do not even try to put both armies into their field positions.  Mr. Ledbetter actually was able to put the 30,000 plus Oda/Tokugawa and 9,000 plus Takeda in their field positions and proved that it could have been done in such an area.  Major kudos in my opinion.  One has to remember that they did not fight with standardized armies back then.

The video continues on the guns and Mr. Ledbetter thinks that there were more guns at the battlefield.  I agree as well.  4,000-6,000 is a good estimation and go on from there.  On the tactical level, one of the major reasons why Nobunaga succeeded besides the use of guns was their superior tactical planning, logistical planning, and training.  They knew from past experiences that the Takeda liked to attack the flanks and when Nobunaga shortened the battlefield to advantage he knew he won part of the battle.

One of Takeda Katsuyori's main problems overconfidence, tactical exploitation by the Oda/Tokugawa, did not expect strong Nobunaga's strong support for Ieyasu, and the intelligence front.  Ieyasu was used as screen and it worked and also the raid on Tobigasu was so successful that it forced Katsuyori to make a move.  You also have the Sakuma Nobumori letter which also made Katsuyori to make the first move.

I probably have left out a few other facts, but please watch the video.  You will learn a lot.  Many thanks to Mr. Nate Ledbetter for tackling the Battle of Nagashino.  Hopefully, his work will be published soon.